The prefabricated beams complete with handrails were floated into position using a barge.  The innovative barge was required due to the concern that the water may not retreat from under the bridge for the second summer running, after over eight years of barely reaching it.

However towards the end of 2011 the worry was that water level was dropping beyond the point where the barge could be used.  The Towong Shire council’s project team then worked feverishly over the New Year to put all the beams in place in a bit over a week, leaving the bridge now free of the vagaries of the lake level.

It looks spectacular and we can’t wait to use it.  However there are still numerous works on the bridge and approaches to complete so the official opening will be towards the middle of the year.

This was very similar to the scene just after Chrismas 2011. 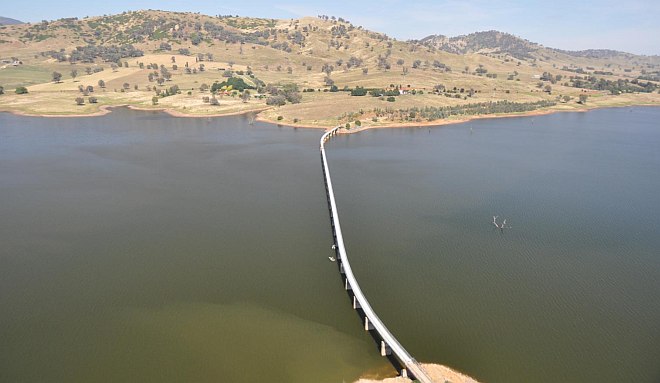 The was the scene a week later.  It’s a long bridge from the air (Towong shire) 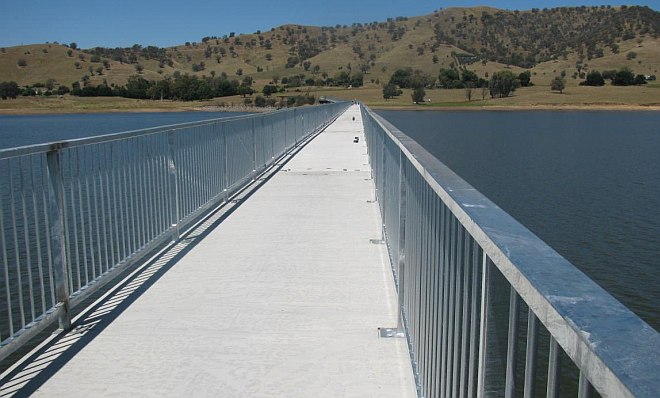 and a long bridge from the ground!! (Towong Shire)

For the hardworking volunteers that maintain the web site it offers a much more user friendly interface and functionality to produce the maps, even with little technical ability.

Unfortunately the forum from the previous website could not be readily incorporated into this new site, so this will be considered once we have had a chance to review how the new website is being used.

People who were on the news email list for the previous website have automatically been added to the new email list for the new site.  However if they wish to post comments on trail descriptions they will have to register again on this site.

The new website has taken a significant amount of our funds and volunteer time to get to this stage.  We hope that people who get value from this become mmebers of Rail Trails Australia or make a donation here to help our ongoing work to assist in the development of rail trails and in their promotion.