This is great news for RTA at the start of December 2013.  After much work and consultation, an excellent submission was accepted onto the list of more than 90 other submissions from various bodies concerning tourism in NSW.

The General Purpose Standing Committee No. 3 is a current standing committee of the Legislative Council,  which was established to inquire into and report on any matters regarding the expenditure, performance or effectiveness of any Government department, statutory body or corporation within various portfolios including roads, transport, regional infrastructure and services, as well as tourism.

To see a copy of the RTA submission click HERE

On 22nd November 2013, the Minister for the North Coast, Don Page MP, announced the successful tenderer for the Casino to Murwillumbah Rail Trail Feasibility Study. After evaulation by the tender panel, the world wide company of Arup Pty Ltd, was awarded the Consultancy.  The Minister looks forward to receiving their report by the end of March 2014.

Since the announcement of the study a great deal of interest has been generated across the region, as the potential benefits from the rail trail become known.  The study will give all interested groups and stakeholders the opportunity to have input to the plan.  One of the requirements of the study is to outline options for the consideration of the current legislative requirements for dealing with rail infrastructure on the Casino to Murwillumbah rail line.

One of the main stumbling blocks for the implementation of Rail Trails in New South Wales is the requirement for an act of parliament to be passed to allow decommissioning of an unused rail line.

The Vice President of RailTrails Australia, Steven Kaye, visited the area in November and believes the NRRT is an unbelievable opportunity for a brilliant rail trail.  Mr Kaye’s visit included meetings with the NRRT committee, as well as some local councillors involved in the proposal. 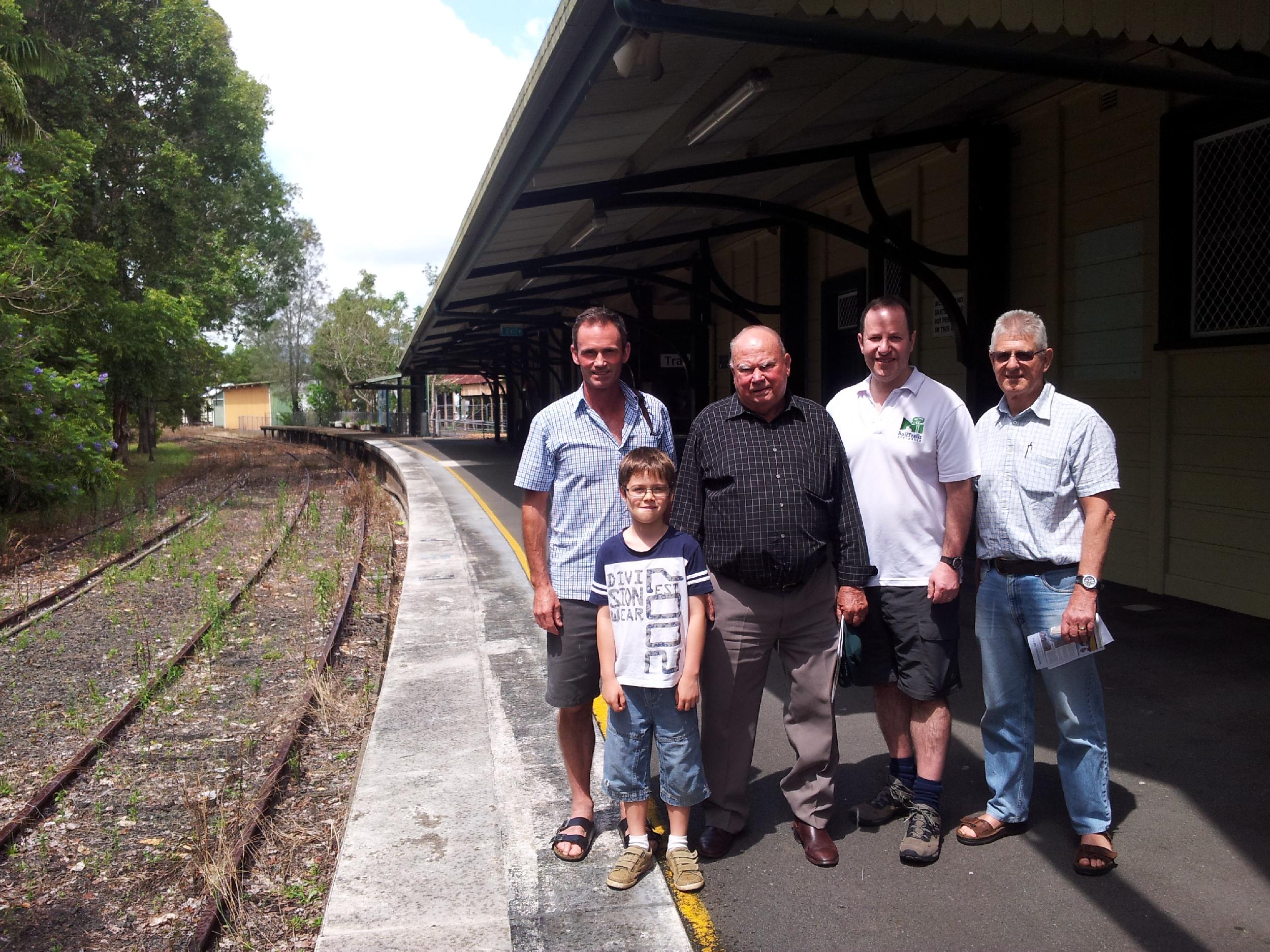 Sunday, November 17 has been chosen as the day to mark 100 years since the Powelltown Tramway started full service. The tramway was a vital cog in the economic growth of Melbourne and Victoria as it carried huge volumes of sawn timber, collected from sidings and ‘stations’, to the broad gauge line at Yarra Junction on the old Warbuton line for trans-shipment to the burgeoning construction industry in Melbourne.

Visitors may enjoy breakfast and a tour at the Upper Yarra Museum (the former Yarra Junction railway station) before embarking on the 17 Km journey to Powelltown. A publication prepared by the Light Railway Research Society of Australia, containing excellent maps and photographs, may be purchased at the Museum. Recreated ‘station’ and siding signs line the road from Yarra Junction to Powelltown. Other points of interest along the way, including a stop at the apple orchard, are also signed.

At Powelltown, visitors may undertake a tour of the Powelltown sawmill, examine photos and memorabilia in the hall, marvel at the exquisite wedding dresses and christening gowns on display in the heritage Union Church and take in other activities around the town. A local band will perform in the afternoon and food and refreshments will be available.

The Department of the Environment and Primary Industry have prepared material and activities beyond Powelltown.

Proceeds from the day will be used to help create proper access facilities at the Upper Yarra Museum and help with further restoration of the Powelltown Union Church. 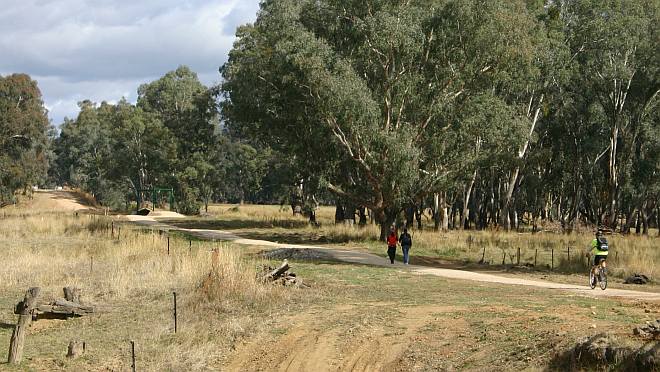 Need to include above detailzzzz

Greater Shepparton City Council has received funding of $150,000 towards the Murchison stage of the Box Ironbark Trail from the Victorian State Government Regional Growth Fund.

The Murchison Steering Committee has been instrumental in bringing together the application for the funding received and Greater Shepparton City Council has contributed $90,000 towards the project.  Design work has now started and it is hoped that the Trail will be opened by the end of June 2014.

The Trail will be approximately 8 kilometres long starting at Impey Street in the Murchison Township and ending at the rail bridge at Channel Inlet Road, near the Waranga Basin.  The Trail includes the recently refurbished historically significant bridge over the Stuart Murray Canal and will border the unique ecosystem of Doctor’s Swamp wetlands with easy access to the Parks Victoria picnic area on the western boundary of the swamp.  It will then continue along to Channel Inlet Road which gives easy access to Waranga Basin.  During a study in 2011 there were over 60 species of birds and over 90 species of flora identified along the Trail.  It will provide an amazing insight into the history surrounding the Murchison Township, along with being able to view some of the beautiful and tranquil countryside, which makes up a part of the unique Goulburn Valley.

Click here for our rail trail description and map

Gippsland’s reputation as an attractive tourist destination will be enhanced with the Victorian Coalition Government to provide $600,000 towards the completion of the final section of the Gippsland Plains Rail Trail, funded through the $1 billion Regional Growth Fund.

Deputy Premier and Minister for Regional and Rural Development Peter Ryan today joined Member for Morwell Russell Northe in Glengarry to announce the funding allocation for the 7.1 km Traralgon to Glengarry section of the rail trail.

“The 7.1 km section of trail between Traralgon and Glengarry is the final leg of the 65 km Gippsland Plains Rail Trail, which stretches from Traralgon to Stratford and passes through communities such as Toongabbie, Cowwarr, Tinamba, Heyfield and Maffra,” Mr Ryan said.

“The Coalition Government’s funding will be used to construct a 2.5 metre wide shared gravel pathway linking Traralgon with Glengarry.

“The funding will also be used to upgrade culverts, repair an embankment, reinstate four bridges and eradicate and prevent the recurrence of termites in the timber bridges.

“The project is also expected to create 27 new jobs, including 15 jobs during the project’s construction phase and a further 12 ongoing indirect jobs.”

Mr Northe welcomed the $600,000 Coalition Government contribution and said once completed the Gippsland Plains Rail Trail would deliver significant economic and social benefits to the region and greatly enhance Gippsland as an attractive tourist destination.

“The Gippsland Plains Rail Trail traverses undulating dairy country, boasts views of the Great Dividing Range and provides numerous opportunities for cyclists, runners and walkers to stop for a rest and a snack and explore the magnificence of the region,” Mr Northe said.

“The project complements a suite of nature-based activities in Gippsland, adding value to attractions such as Wilsons Promontory, the Gippsland Lakes District and the existing trails, including the Great Southern Rail Trail, Gippsland Lakes Discovery Trail and the Grand Strzelecki Track.

“It is estimated that visitors to the Gippsland Plains Rail Trail will contribute more than $3 million to the local economy each year.

“The trail will also provide an alternate transport network between the towns along the route, building community health and wellbeing.”

“Providing funding support to complete the Gippsland Plains Rail Trail was an important 2010 election commitment and one the Coalition Government is proud to have delivered.

“This project is another example of the Coalition Government, through the $1 billion Regional Growth Fund, delivering important community-led local initiatives.”

Another section of the Brisbane Valley Rail Trails reopens

The Wanora Road to Fernvale section of the Brisbane Valley Rail trail has recently opened after the 2011 and 2013 floods.

Once again thanks must be given to both the State and Federal Governments for the Natural Disaster Releif Funds which made these repairs possiable.

Come out for a day in the country and vist the many events wihich are planned for this day.

Come on the 2 hour Guided tour along the Dularcha Rail Trail and forest trail from Mooloolah to Landsborough . This walk starts at Mooloolah at  9am ( see railtrails website for direction ) and finishes at the Landsborough Museum around 11 am.

Visit the many shops, cafes and Museum at Landsbourgh and explore the towns of Glasshouse Mtns ,Beerwah, Mooloolah.

After 7 years of hard work by the Friends of Atherton Tablelands Rail Trail and the Tableland Regional Council, work will begin on removal of the rails and sleepers shortly and be completed by December 2013.

It is hoped that the Mareeba Shire Council will continue this Trail at a later date.

Construction on the first stage of this Rail Trail will start in early 2014 and be complete by mid 2014.

Cyclists, runners and walkers turned out in force in on Sunday 25 August to test themselves on the newest section of the Great Southern Rail Trail in Gippsland Victoria, a nine kilometre section of trail linking Foster and Toora.

“This is the first stage of a total of 18.5 kilometres worth of extensions to the Great Southern Rail Trail that will link Foster to Welshpool. Stage two of the project, which involves an extension from Toora to Agnes will begin later this year, with stage three from Agnes to Welshpool to begin next year.”

The South Gippsland Shire Council has contributed $900,000 to the project. In his speech.

This extension brings the total length open to 57 kilometres, with the new section at the same high standard as the rest of the trail. Despite surrounding areas being sodden the new trail surface was firm and smooth. The most interesting points are probably the Franklin River bridge and of course the wind turbines on the hill behind Toora. The communities of Foster and Toora are also looking to develop their respective station areas and make them part of the community again.

Along with the further extensions planned, the critical project is to ‘Bridge the Gap’ between Koonwarra and Meeniyan where several large bridges require a challenging on-highway diversion. As reported previously South Gippsland Shire Council is investigating options in this section and the need for this was brought up several times during speeches.