After a 20 year absence, some railway track is returning to Cowwarr as part of the Gippsland Plains Rail Trail to form a display of a historic GY freight wagon.

The Walhalla Goldfields Railway has been commissioned by the Gippsland Plains Rail Trail Committee of Management to lay a 12 metre section of broad gauge railway line on the outskirts of Cowwarr to house a historic GY freight wagon as part of an interpretive display for rail trail users.

“We are delighted to undertake this work for the rail trail committee and to see the return of some railway line to Cowwarr” said Michael Leaney, President of the Walhalla Goldfields Railway. “Our way and works volunteers have maintained many of the skills required for railway track construction by traditional methods which have died out with increasing mechanisation. It’s pleasing that the Gippsland Plains Rail Trail Committee saw the Walhalla Goldfields Railway as being an important resource for this type of work and selected us to construct this track section. It’s one volunteer community group helping another.” he added.

“We’re very excited to see the return of rail track to Cowwarr even if it’s only 12 metres long” advised Helen Hoppner, Chairperson of the Gippsland Plains Rail Trail Committee of Management. “To have this railway track and wagon with interpretation signage along the rail trail route will add greatly to the wonderful experience the rail trail provides to walkers and cyclists. The expertise and skills that the Walhalla Goldfields Railway is providing is invaluable and they have made getting this project completed seamless. We are very thankful that we have a proactive, practical organisations like the Walhalla Goldfields Railway in close proximity and that they have been willing to assist in making the Gippsland Plains Rail Trail a fantastic tourism asset for everyone to enjoy.” she added.

Construction of the 12 metre section of railway track will occur on Friday 21 March and the GY Wagon will be delivered to the site in late March. 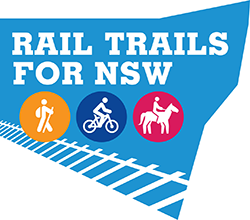 Its 21 years since regional rail trails really got underway in many states across Australia, except NSW. Now its time to recognise the increasing support across NSW for railtrails. The official launch to get rail trails developed in regional NSW occurs on Wednesday 26th March 2014 at Parliament House in Sydney.

The public launch will be from 6pm (for 6:30 start) to 8pm when all supporters are welcome to attend to meet local government supporters from accros NSW and learn about the action plan to establish Rail Trails in NSW.
Speakers and special guests include Victorian Local Government representatives who have built and operate several successful rail trails, the Great Victorian Rail Trail and the High Country Rail Trail.

Please refer to our Rail Trails for NSW campaign page for the background to this launch.

If you would like to attend you must RSVP Yaffa Gould (E yaffagould@gmail.com) by Monday 24th March.
Please include names of all attending (a requirement for Parliament House security) and your/their association or organization if applicable.

There is a limit on the number of people that can attend.

Following submissions by Rail Trails Australia, local NSW rail trail groups and supporting groups, the report includes a section on rail trails and recommendation No. 20 “That the NSW Government allow disused rail corridors in New South Wales, or land immediately adjoining the rails that belong to the Government, to be developed into rail trails.”

This is a significant step in support for finally allowing rail trail development in NSW.  It is inline with greater support from local government, particularly the Tumbarumba Shire Council which is supporting the development of the Tumbarumba – Rosweood Rail Trail following the recommendations of a 2006 Feasibility study and widespread community support.

The reports recommendation will also tie in well with the official launch of the Rail Trails for NSW campaign later this month, which will see many volunteer and local government proponents gather in Sydney.

The full report can be downloaded from the Committee’s site here. 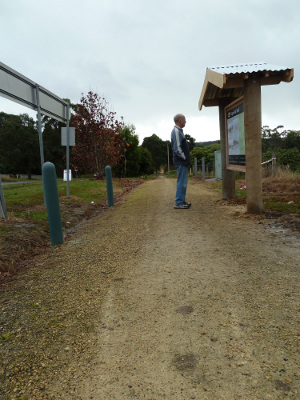 The “Friends of the Tiger Trail” and the wider community are to be congratulated on their tremendous efforts to raise money towards the study. They have raised over $10,000 to date. The State Government has announced that they will give $45,000 and the Colac Otway Shire has donated $5,000 towards the feasibilty study.

A completed Feasibility Study is an integral part of the process of developing the trail. The study will be able to identify how closely the route can follow the original railway formation as well as design, engineering and environmental issues.  It is also important to provide an estimate of the potential costs.

Currently 7km of the trail is completed, starting at the Forrest end, and including interpretative signage. The total length will be 30km, and includes Barwon Downs, Deans Marsh and ends at the Birregurra station. It passes through the Yaugher State Forest and undulating farmland. It promises to provide a very pleasant ride/walk.

Click here for more information about the Tiger Rail Trail.

The very popular Lilydale to Warburton Rail Trail east of Melbourne is not complete.  It can extend another 12km through the scenic Yarra Valley to Yarra Glen.

Over the past six years Rail Trails Australia has been working with Bicycle Network, the Shire of Yarra Ranges and other stakeholders to make this a reality.

What is needed now is greater understanding from the local community on the benefits of the rail trail , and some local champions as part of a Rail Trail Friends group to assist in bringing this section to reality.

Come along this Saturday 1st March to learn more, meet fellow rail trail supporters and show your support. Better still encourage others to come along as well.

See our description for more information and a map on the rail trail. Save

Northern Tasmania Development has completed a demand and economic benefit assessment for the proposed rail trail between Launceston and Billycock Hill, near Ledgerwood.

The report concludes that after five years (post-construction), the Rail Trail will create $6.8million per annum of economic impact in the region with the creation of 40 new jobs. This benefit grows to $11.2 million per annum after 15 years.

This project will provide a significant enhancement to the already funded network of mountain bike trails, making the northern region a truly competitive tourism and cycling destination.

The full report can be viewed on the Northern Tasmania Development website.

Click here for further information on the section of the North East Rail Trail that has already been developed between Tonganah and Tulendeena.

Transfield Services are replacing some of SP AusNet’s power lines with new conductors on 23rd of January 2014 near Leongatha. The work involves replacing the power lines which cross the Great Southern Rail Trail.
During the work, the trail may be closed to traffic temporarily for a few minutes at a time. Crews will be available on location to assist anyone travelling on the trail during the closures.

Thanks must be given to Queensland Parks and Wildlife Services team for quick responce to this matter.

So come for a walk or ride along Queenslands newest rail trail.

The opening of this first 4.5km section of the rail trail is the culmination of 8 years of work by the local community.  Particular acknowledgement goes to the local Bicycle Users Group.

The rail trail has already been in unofficial use for several months and is being very well used by local residents for recreation and commuting.

Congratulations to the local community, Livingstone (and formerly Rockhampton Regional Council) and the state government for this impressive development.

For maps and more information about this rail trail  click here