We’re delighted to announce the arrival of our new Rail Trails apparel collection. Developed by the Rail Trails Australia team and available exclusively from Hub Cycling, our collection includes a short sleeve jersey, long sleeve jersey and cycling tee, all made to the highest standards for protection and comfort.

You can feel good about your purchase too. A small percentage of all sales will be donated to Rail Trails Australia, helping us continue in our efforts to develop and promote an Australia-wide rail tail network.

To view and purchase the range please visit HUB CYCLING.

Come and Learn About NSW Rail Trails at the RTA AGM

Rail Trails Australia is pleased to have Tim Coen from Rail Trails for NSW speaking at our Annual General Meeting on Friday 10th November 2017.

It will be well worthwhile to come along and meet fellow rail trail supporters, and hear first-hand about rail trails in NSW. What has happened to date, and what are the plans for NSW with its enormous potential of wonderful rail trails?

All rail trail supporters are welcome. Please let our secretary Frank Kinnersly (fkinnersley@railtrails.org.au) know if you are attending to ensure we have enough seats.

In conjunction with the AGM, elections will take place for all positions on the Rail Trails Australia committee. New members to the committee are always welcome. If you would like to join the committee and help guide our work please contact the Secretary, Frank Kinnersley, by 4pm 10th November. He will provide a nomination form and explain the process (fkinnersley@railtrails.org.au). Please note that nominees must be financial members at both the time of nomination and at time of the AGM. RTA apologises to its members for the late delivery of the magazine which has the official notice for the AGM.

We look forward to seeing a gathering of rail trail supporters Friday 10th.

Big celebrations are being held along the entire 44km of the South Burnett Rail Trail.

The celebration will start in Kingaroy with Lions Fundraiser Breakfast,arts and craft stalls at the Kingaroy station.(Cnr Haly and King St) with the official launch of the trail at 6.30 am.

Trail batton will be relayed along the trail by local running groups.

Morning Tea will be avaiable to purchase in the CWA hall.(Alexander Street)

The Wondai Art Gallery (Haly St.) will supply a BBQ Lunch,Toasties and Pancakes for a small fee.

Lots of entertainments planed for the Children

Celebration will start at 8am with a 5km fun run,with Festivities continue throughout the day

WATER STATIONS will be available in each of the following towns along the rail trail,

Bike Transport will leave MURGON at 5am Showgrounds tp arrive in Kingaroy for the 6am opening proceedings.

Why not stay an extra day and ride the Kilkivan to Murgon Rail Trail.

SOMERSET will soon be home to Australia’s longest rail trail with the Federal Government today confirming Somerset Regional Council was successful with a grant application to complete the historic Brisbane Valley Rail Trail.

The Australian Government today announced it will provide funding of $1.45 million to Council to complete upgrades to the rail trail from Toogoolawah to Moore.

“We could not be happier with the outcome and what this will do for our region in terms of tourism, growth and economic development,” Cr Lehmann said.

“We are very appreciative of the federal government in seeing the immense value that completing the trail will have on our region.

“This really is wonderful news for all of Somerset and we are so excited about the outcome.”

“Council recognised the economic benefits of a completed rail trail early on and agreed to take over management of the trail if it was completed to an acceptable standard,” Cr Lehmann said.

“Council knew early on that it could not accept a sub-standard upgrade of the rail trail, as the state government had suggested, which is why we applied for federal funding to ensure the surface of the trail would be of an acceptable standard that would not end up costing our ratepayers substantially more in the long-term.”

Council applied for the federal government funding late last year due to a shortfall in funding offered by the state government.

Council will utilise some of its own funds as well as $1.8 million from the state government to complete the rail trail upgrades.

This funding will allow upgrades to be completed to the Toogoolawah to Moore section of the Brisbane Valley Rail Trail and will allow the entire length of the rail trail to be open to the community for various users groups to enjoy including cyclists, trekkers, horse riders and more.

Cr Lehmann said the funding was a huge win for Somerset and one that would continue to deliver for the region well into the future.

After almost 15 years of hard work, the unique situation in NSW where rail trails are not allowed to be constructed on the thousands of kilometres of long disused rail corridors is changing.

A few days ago the NSW Upper House passed legilsation almost unanimously that will officially close the railway line between Rosewood and Tumbarumba in the mountains south of Wagga Wagga.

This will allow the construction of NSW’s first real rail trail on a government corridor, the 21km Tumbarumba to Rosewood Rail Trail.

Given the unique controversy that rail trails have caused in NSW, the Tumbarumba Rail Trail is regarded as a “pilot” rail trail and when undoubtedly it is a success for the community it is hoped that further legislation will be passed to allow more widespread development of rail trails in NSW and take advantage of the enormous potential in NSW.

The Snowy Valleys Council in conjunction with the local rail trail steering group (RIverina Highlands Rail Trail) have already obtained $4.8m in funding from the NSW government for the construction of the Tumbarumba Rail Trail so we look forward to construction beginning in earnest when the documentation has been formalised.

Riverina Highlands Rail Trails said it was the news the group was waiting to hear.

“This is momentous as it is the first such access agreement in this state” the group said in a statement.

“We hope the first sod will be turned very soon.”

Full details and map of the Tumbarumba to Rosewood Rail Trail here.

It has been a long time since RTA started working on this particularly with the Riverina Highlands Rail Trail Steering group, who have been consistently at the forefront of efforts to establish rail trails in NSW. This has been helped tremendously in the last few years by Rail Trails for NSW and the many other local communities around NSW who have plans for great rail trails.

After many false starts it was pleasing to see almost unanimous support for the legislation and thank those politicians who have acted for the greater interest of the state, and all of Australia. Importantly the amended legislation ensures these valuable routes are retained as rail trails in public ownership for generations to come.

The legislation detail can be found here. 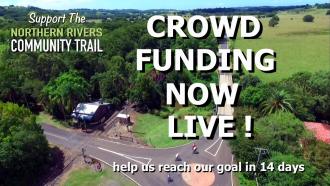 If we raise this money, along with $100K from both councils, it will help us to secure the government funding needed to build the trail.

This trail will be for you and future generations to enjoy.

Please get on board and give as much as you can, SOON!

or find it on:

Full details and map of the proposed rail trail here 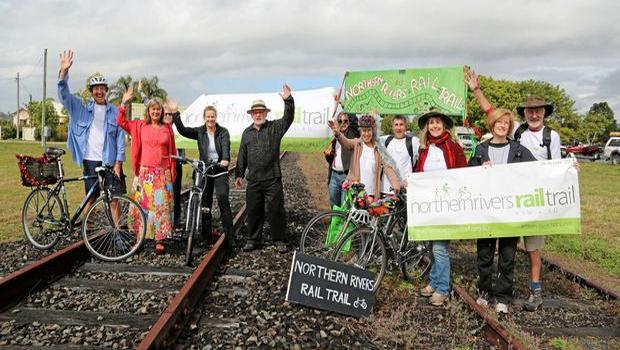 Murray to Mountains Rail Trail to extend to Yackandandah

In May the Victorian state government has announced that the popular Murray to Mountains Rail Trail in north east Victoria will soon be extending a further 21km from Beechworth to Yackandandah.

The $6million funding announcement also includes allowance for an on-road connection further east to Osbornes Flat, which could be part of a future on-road link to the High Country Rail Trail at Huon.

Indigo Council Mayor Jenny O’Connor said it was the biggest single funding contribution of its kind for the region yet, and council would immediately look at when works could begin.

The Victorian government also announced another $6 million for promotion of trails including to international markets and track enhancement.

The funding will be particularly welcome in the region as several major industries announced job losses around the same time.

Labor Upper House Member for Northern Victoria, Jaclyn Symes, announced the funding in Beechworth. Ms Symes said she had worked very closely with Tourism North East, local councils and the Minister for Regional
Development, Jaala Pulford to secure the funding in this year’s budget. “This is a massive win for tourism, business growth and employment opportunities for communities in the North East,” Ms Symes said.

Rail Trails Australia is particularly pleased that the funding includes initiatives to activate business along the trail so that the local economies benefits from the growing number of visitors to the trail network. This is also needed on many other rail trails that have potential to provide greater benefits to their regions.

More about this in the next issue of Rail Trail Connections and details of how the rail trail will be constructed to Yackandandah, given some sections of the former corridor have been sold off.

Full details and map of the Murray to Mountains Rail Trail here. 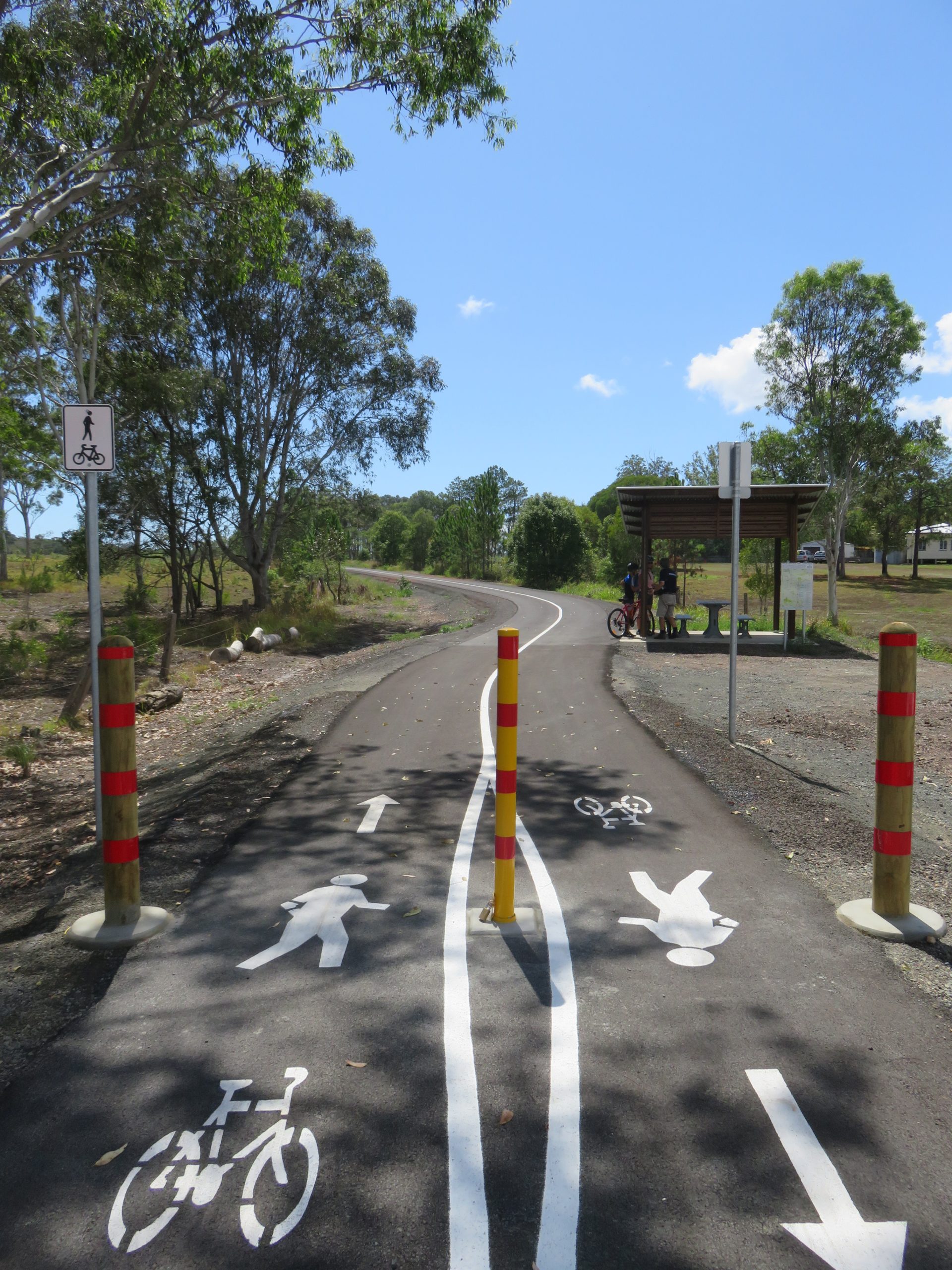 The 3.2Km extention of the Rail Trail from Urraween Road to Chapel Road has now opened.

The Queensland Government provided $439,750 toward the cost of this extention.

At the pier it links with the 12.5 km-long shared walk/cycle path along the foreshore that links Urangan to Gatakers Bay.

All aboard for a fun day of activities to celebrate the offical of a friendly tourist attaction in the North Burnett Region.

Construction resumes on the Kingaroy to Kilkivan Rail Trail

The South Burnett Regional Council has resumed work on stage one

of the Kingaroy to Kilkivian Rail Trail.Stage one, from Kingaroy to Murgon will open later is year and will be a 44km sealed trail. While some sections of the trail are finished, the council ask that you don’t use the trail until all work is complete.

For more infromation about this rail trail click HERE