Rail Trails of Victoria and South Australia is now available

The new edition has just come back from the printers. We are posting copies today (12/12/2001) to everyone who preordered.

It is not too late to get a copy for Christmas. Order this week and (subject to postage delays) we will do our best to get copies out before the 25th. Full details are available in the Guides section of the web site.

How do you spell “rail trail” anyway? (Does anyone care?)

Three years ago, the Railtrails Australia committee discussed how to spell “rail trail”. You might suggest that there are more important things to discuss, but we needed a consistent spelling. Is it “rail trail”, “railtrail” or even “rail-trail”?

At the time it was decided that we preferred it spelt as a single word after all “railway” is one word, so why not “railtrail”? It was hoped that with incrased usage this a single word spelling would increase its chances of being adopted into the dictionary.

Unfortunately we were in the minority and the “rail trail” spelling has become the defacto standard, so moving with the times we have now adopted “rail trail” as our standard spelling.

New Edition of Rail Trails of Victoria and South Australia 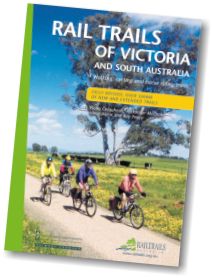 A new edition of our Victorian Rail Trail Guidebook will soon be available. The new guide has been fully revised with improved layout, new photos and revised maps. This edition also includes the three main rail trails in South Australia.

Like the first edition, the book is an easy to carry A5 size with a wire binding.

Full details are available in the Guides section of the web site.

Railtrails Australia has been monitoring the possibility of a rail trail along at least part of the historic Brisbane River Valley railway. In 1998 we reported the destruction of several low level heavy timber bridges on the northern section and last year discovered the Shire of Esk had an intense interest in opening the 7 km section between Fernvale to Lowood, 39km south of Esk and near the vast Wivenhoe Reservoir.

RA President Michael Oxer has made several exploratory visits along the line and provided information to Council representatives to assist their efforts. This August he met with Councillor June Bray and CEO Warren Oxnam to discuss developments. Following that meeting he made representations to the offices of two Queensland Government Ministers and secured a meeting with Mr Ross MacLeod, Senior Policy Advisor in the Office of the Minister for Environment.

Michael reports that in establishing meetings with government officials he found a copy of the RA Railtrails of Victoria guidebook served as a quick and graphical way of introducing the matters he wanted to discuss and helped gain interest and support.

The Esk Shire needs assistance with ‘on the ground’ coordination of a number of elements involved in the project. A number of government authorities need to be actively involved and focussing that effort is now critical. Local support is reported to be growing and several difficulties along the Fernvale to Lowood section involving old timber trestle bridges have been resolved with neighbouring landowners. A growing number of local folk are using parts of the line for walking but until rails and sleepers are lifted and the track surface prepared bicycle riding is not an option.

We are hoping that through the good offices and support of the Minister for Environment, Honorable Dean Wells, this potentially fine rail trail will soon become a reality, bring local tourism benefits and provide a new use for a very old route between two fascinating Queensland country towns alongside the Brisbane River.

There have been developments on a number of Victorian trails in recent months. A quick round up:

At the Annual General Meeting of the Friends of the Lilydale to Warburton Trail last week, the position of Treasurer was not filled. If would consider helping in this capacity, please contact Arthur Francis (president) on 9725 7074 or joarth@redcentre.com. Committee meetings are held at a location in the Yarra Valley.

To celebrate the centenary, the Friends of the Lilydale to Warburton Rail Trail are holding a photographic competition. Entries may be made in the following categories:

Each category has a colour and black and white section. Winners in each section will receive a Centenary Award. There is also a Grand Award.

Maximum 4 prints per entrant per category. Only non-professional photographers may enter. All images must be identified with a location. The Friends reserve the right to reproduce any of the entries without seeking authorisation from the participants.

Please use the entry form below.

(Click on the form to open in a new window for printing.)

The Great Southern Rail Trail have a new information brochure. It is available by writing to:

The Age of 26 June reports that the Victorian Government plans to use railway corridors for the roll-out of cable for broadband networks.

Linear railway corridors are ideal to allow cable to access centres around regional and rural Victoria. Initially the government plans to lay cable on routes to be upgraded with fast passenger services.

Eventually this may extend to closed railway corridors – both current rail trails and future trails. There is great potential for new rail trails to be created as part of the cable laying process and for cable companies to provide on-going funding to current trails where it uses their corridor.

The article from The Age can be read at: on the web.

Drysdale rail station is now complete with a kiosk which is open on train running days. Hot/cold drinks and snacks are available. Information and maps of nearby attractions are also stocked.

Due to incomplete signage, the trail is difficult to follow from the Geelong direction when approaching Drysdale. Cyclists and walkers should cross High St then follow the fence along the rear of station platform. A small grey building is then visible (toilets) to the left about 50 meters beyond the main station building. Proceed along the left side of this grey block to pick up the trail running parallel to Station St. Signage is in place the rest of the way.

Note that horses are not permitted on the trail between Drysdale and Queenscliff. Also, the railway requests that cyclists and walkers do not enter the railway yards at Queenscliff or Drysdale. These areas are off limits to the public and are potentially hazardous.

The Bellarine Peninsula Railway caters for bikes on all it’s trains, Bike tickets are just $3. Trains run every Sunday, most public holidays, Tuesdays and Thursdays during school holidays. Trains depart:

Trains will stop to pick up/set down at ‘Lakers Siding’, ‘Ward Road’ or ‘Suma Park’ on request to station staff. An intensive service runs over Christmas/New Year (daily). At Christmas and Easter a different timetable operates, phone (03) 5258 2069 or (03) 52 513725 or visit the railway’s web site.