This section of the trail will open before the end of 2021. It includes stunning views of the Burnett River and koalas have been sighted in the eucalypt forest beside the trail.

The 29 km Burnett River Bridges section from Gayndah to Mundubbera is close to the river and has a remarkable number of heritage listed bridges.

There are six historic tunnels built just after World War I.

Tunnel 6 still has the rail line and the original ‘hogback’ sleepers.

We acknowledge the Wuli Wuli and Gureng Gureng people, the traditional custodians of the land and waterways on which the rail trail is situated.

Queensland Railways constructed an inland railway loop from Mungar (south of Maryborough) to near Gladstone via Monto — a total of 406 km. The first section from Mungar opened in 1889 and the last section to join Monto from Gladstone opened in 1931.

The 125 km Mungar to Gayndah track is still in place and may be used in the future.

In 2012 several community groups from towns along the rail line from Gladstone to Maryborough held discussions with the Queensland Government about the future of the corridor, which closed in 2002.

Each district had its own aims and ambitions, ranging from preserve the tracks as a working railway to developing the corridor as a recreational trail to showcase the old infrastructure while creating a rail trail to attract a range of tourists to the towns and districts along the path of the old corridor.

One of the many significant bridges between Gayndah and Mundubbera. (Mike Goebel 2014)

Spectacular view from tunnel 2 near Kalpowar (2018)

The local group has plans to make these former carriages part of the rail trail experience. (2018)

Another significant bridge between Gayndah and Mundubbera (Mike Goebel 2018)

Mundubbera station in 2015 when the rails were still in place. (Mike Goebel)

The station and a length of track remain at Eidsvold (2018)

The rails have just been removed at Monto (2018)

Monto station, which is being used for short stays by caravans and RVs (2018)

It takes a lot to build a railway and a lot to remove it. A small part of the remains of the railway at Monto (2018)

Monto has many of the charms of a Queensland regional centre. (2018)

Typical scenery between Monto and Kalpowar (2018) 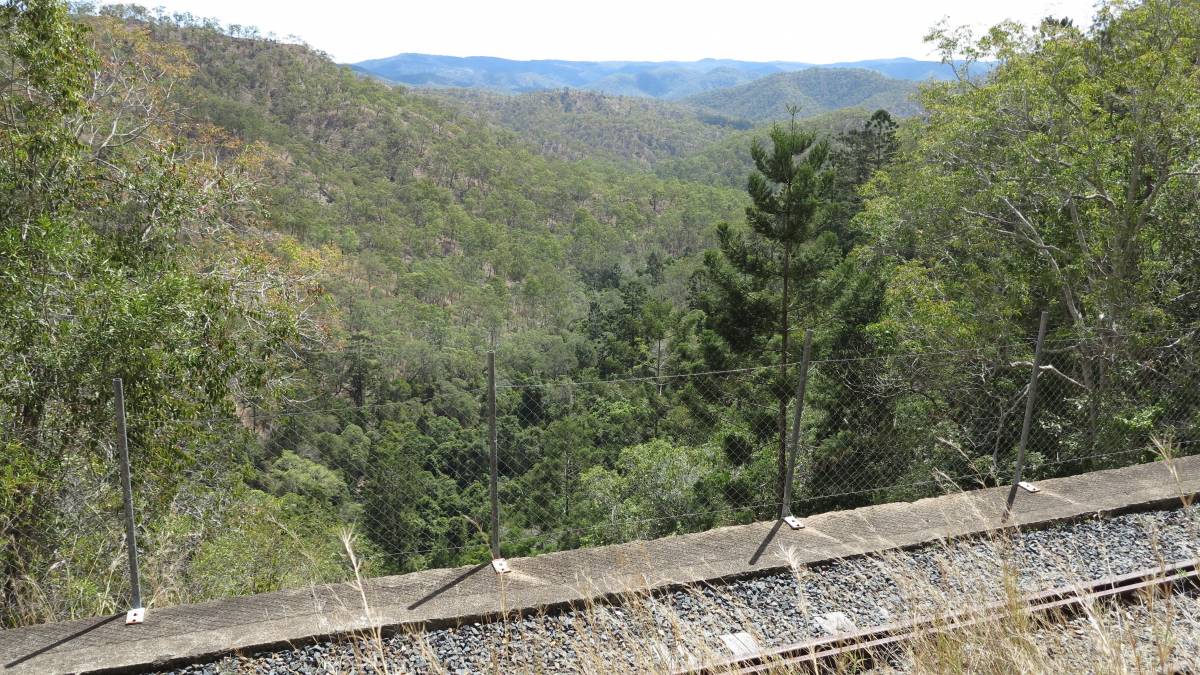 After descending the range, typical scenery to Many Peaks and Builyan. (2018)

A little bit of civilisation again at Many Peaks (2018)

At Boynedale the rail line skirts Lake Awoonga, as it had to be relocated in the 1990s when the lake level was raised (2018)

I have recently cycled the section from Barimoon Siding to Many Peaks. Currently there are temporary corflute rail trail signs placed at strategic positions from Monto to the high point over the ranges at Barimoon Siding. The first of six tunnels occurs within the first kilometre of the start of the trail and the remaining five tunnels appear within the next three kilometres. One tunnel is significantly curved so that as you enter it is dark but you proceed only a short distance before light starts to appear from the other end. So torches are not essential but may be helpful. The first ten kilometres of the trail descends via sweeping curves through the tunnels and many impressive cuttings, delivering panoramic views of the countryside. The trail surface is firm and the first two gates across the trail have ride over stock grids beside them.
Once you descend to the valley, the surface becomes less firm with some soft sections, gates to be opened and steep and loose gullies to be negotiated under existing rail bridges. The gullies are manageable when dry but will likely be impassable if water flows during or after rainfall events. All but one gates are straightforward to manage. The exception isn't actually a gate; it is a set of barb wire runs that are on star pickets spacers with a shortened star picket that is used as a lever to tension the fence/gate section closed. It is a bit of a handful.
Approaching Many Peaks there is a signed loop detour to get trail users around the disused railway bridge. The signage is a little vague. There is brand new toilet amenity block at the historic Many Peaks Railway Dam but that is not on the rail trail. You need to get on to the (very low traffic) bitumen road at Many Peaks and ride back less than a kilometre to the new park. It is well worth doing so as there is a new shelter shed, history information signage, toilet block and elevated lookout over the old weir. There is no drinking water available.
The final section to Buliyan Siding has more soft sections. Bring all your water and food and allow more time than you may think to ride the entire section especially if you are planning an out-and-back ride. This is a fantastic trail, challenging in places, still in its infancy as a rail trail.

The opening of the Dawes Range section of the Boyne Burnett Inland Rail Trail in ...

The Boyne Burnett Inland Rail Trail would provide a link between Taragoola, near Gladstone, south ...