The Denmark-Nornalup Heritage Rail Trail consists of three open sections, starting at the eastern boundary of the Shire of Denmark on the banks of the Hay River (11 km east of Denmark itself), while its western terminus is just outside the small settlement of Nornalup on the Frankland River. A fourth section between Parker Rd and Peaceful Bay Rd is incomplete and requires 14 km of road riding to bridge the missing section.

The trail starts at Hay River, providing views of the remnant pilings for the old rail bridge across the river. Running through remnant bushland and farmland, the rail traverses the edge of Wilson Inlet and includes bird hides and picnic shelters before crossing the Denmark River over a substantial refurbished rail bridge. This section is for walkers and cyclists only, with the Wilson Inlet section being accessible for wheelchairs and prams.

This longer section leaves the Denmark River via a small railway heritage display with old rail cars and an intact section of the old line. Leaving town through remnant bushland and farmland, the trail runs with the Munda Biddi Trail before branching off and crossing several old rail bridges. The section ends abruptly at Parker Rd and can be used by walkers, cyclists and equestrians, with the section close to Denmark being wheelchair and pram accessible.

The trail begins again at Peaceful Bay Rd and is dominated by the tall karri forest that is a feature of the region, as well as open plains. The trail ends at the site of the old Nornalup Station, which is marked by a commemorative plaque.

To report issues or problems please contact the Shire of Denmark at enquiries@denmark.wa.gov.au or 9848 0300

We acknowledge the Minang people, the traditional custodians of the land and waterways on which the rail trail is built.

The missing section from Parker Road to Peaceful Bay Rd has not been constructed because two bridges have to be replaced. This is not expected to be completed for several years.

Work on the Denmark to Nornalup line began in 1926, employed 300 men and took nearly three years to complete. The distance was only 55 km but the country was rugged and presented many engineering problems. Deep gullies had to be filled, rivers and creeks were bridged, and huge cuttings were carved out of the hillsides. The grade on the whole line needed to be 1 in 60.

The work was carried out with picks and shovels, axes, cross-cut saws and gunpowder; no bulldozers, backhoes or chainsaws were available, just a ‘steam navy’ to excavate some of the bigger cuttings, and hard work by the men and their horses. Despite the hazards, the project was accident free.

The men worked a 44-hour week; a typical day for the supporting train crews began at 5 am and did not finish until 10 pm.

The line served 900 people on 15 settlements and  played a central role in the lives of the settlers. Two trains a week carried passengers, collected farm produce and delivered goods and supplies, including cattle for the settlers’ farms.

The Denmark to Nornalup railway line closed on economic grounds in September 1957, despite protests from Denmark residents.

In the 14km section between Parker Rd and Bow Bridge some parts are being gradually developed. It is hoped this will be opened in the future, perhaps when it becomes part of the Munda Biddi trail when that trail is extended to Albany. 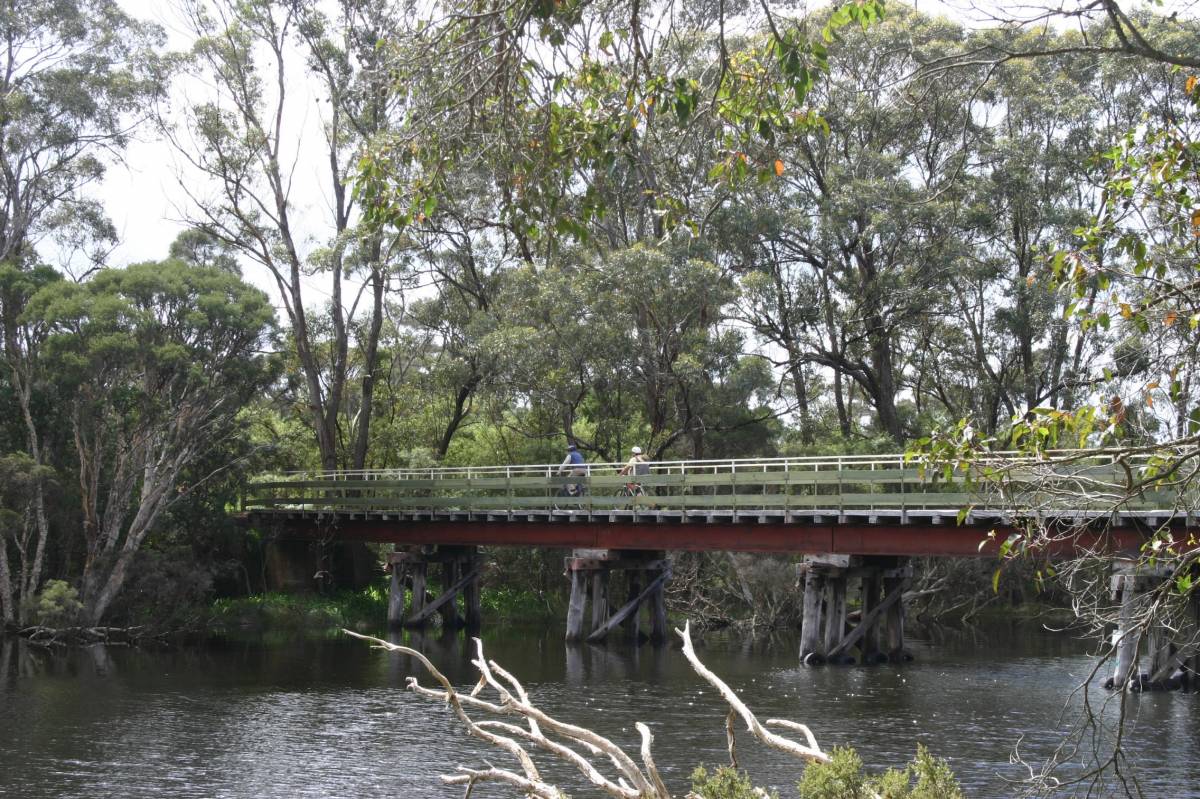 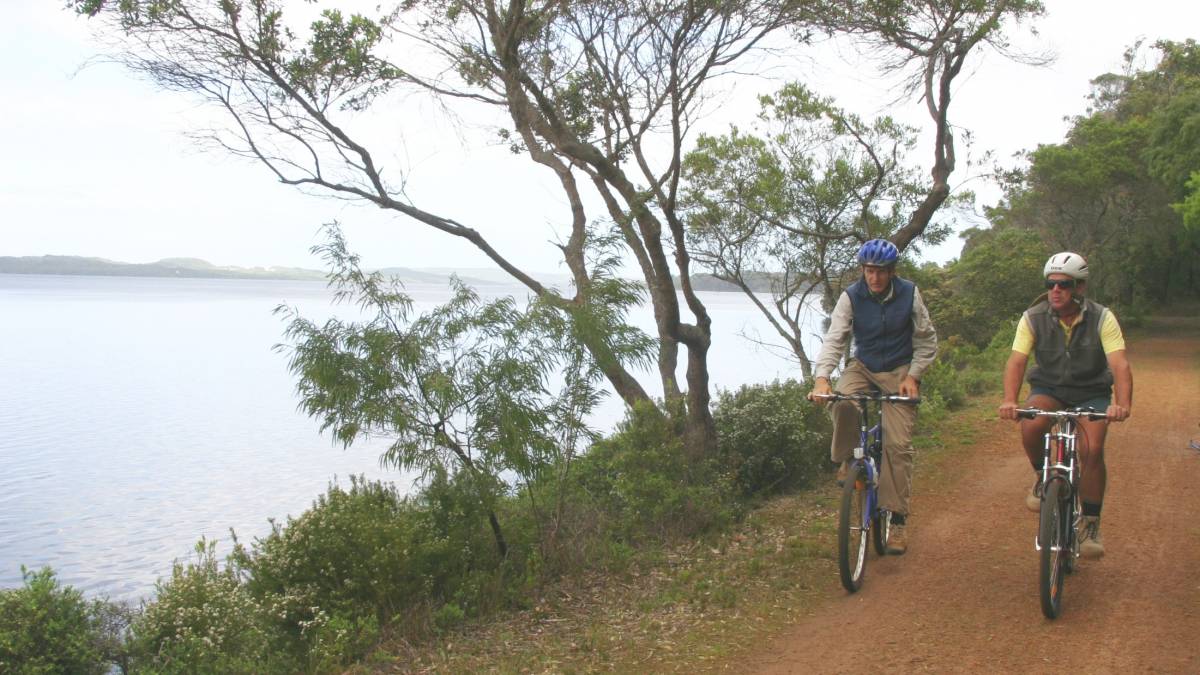 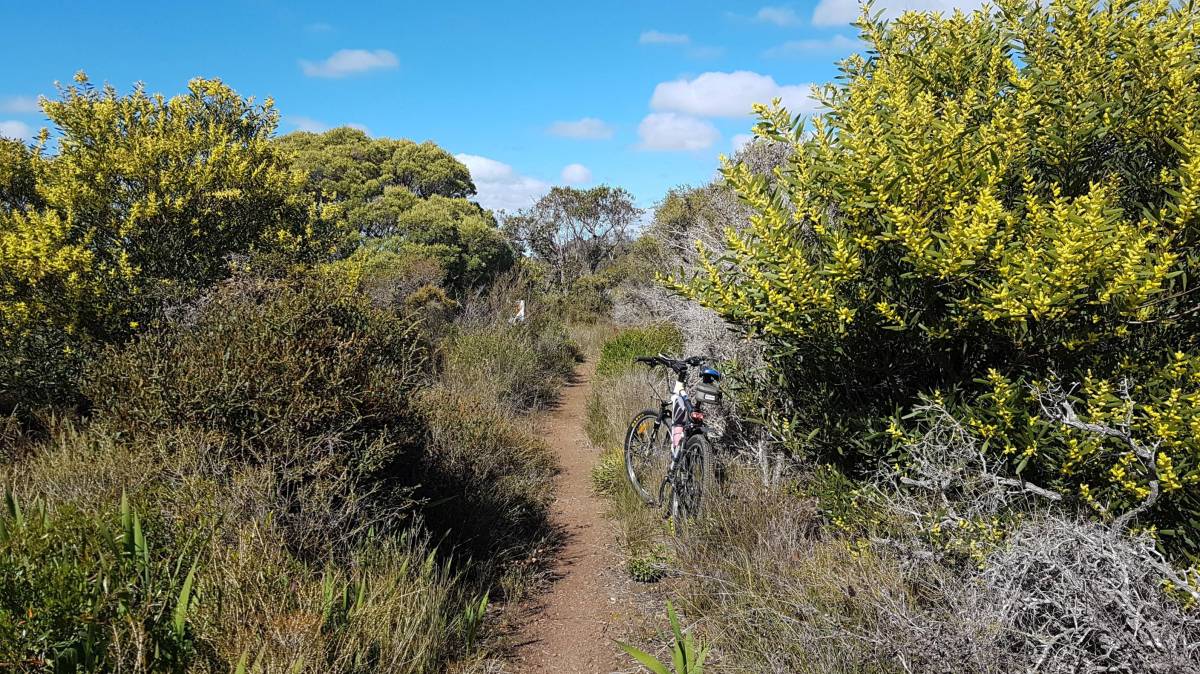 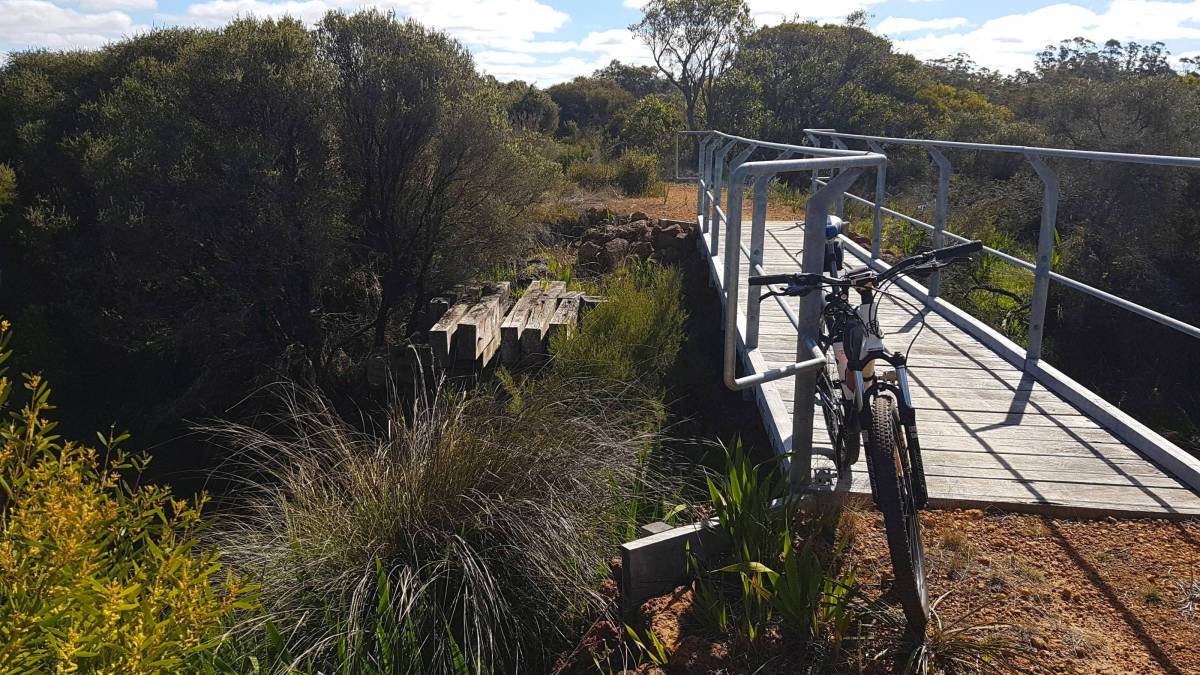 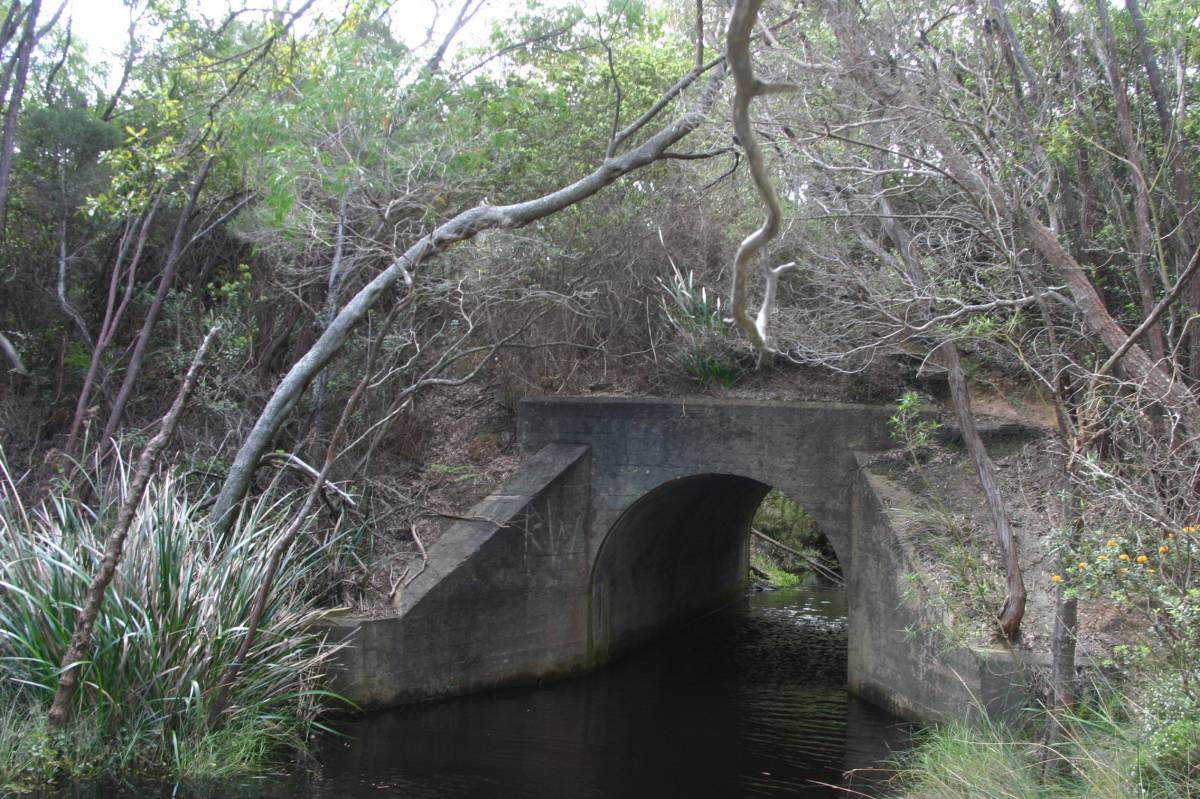 One of the old railway culverts along Wilsons Inlet(2006) 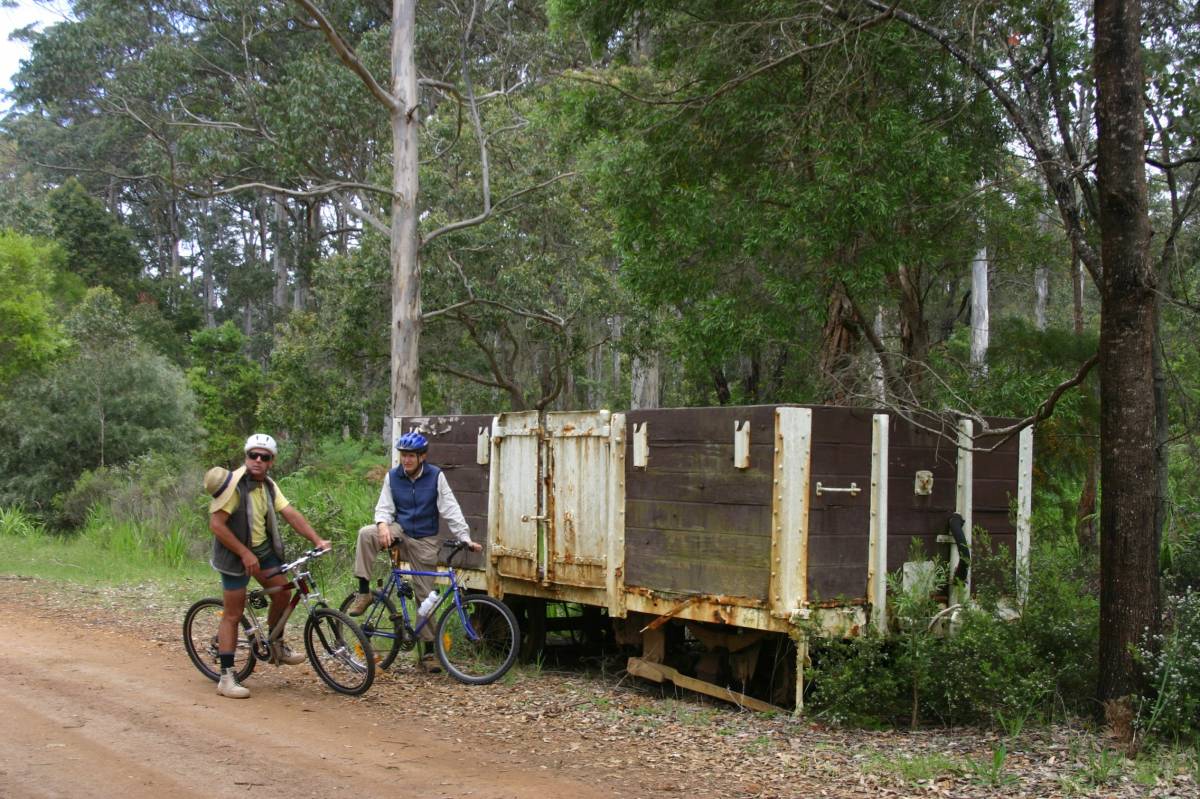 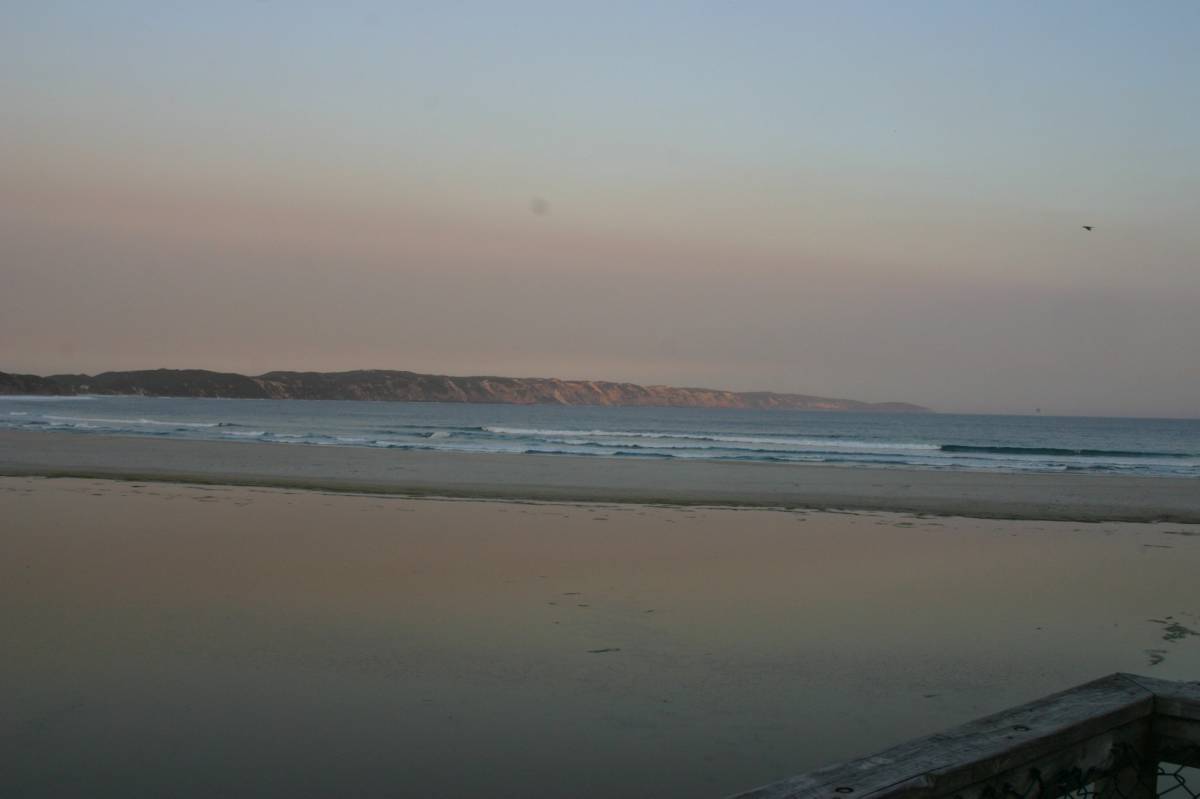 The Ocean Beach at Denmark at dusk 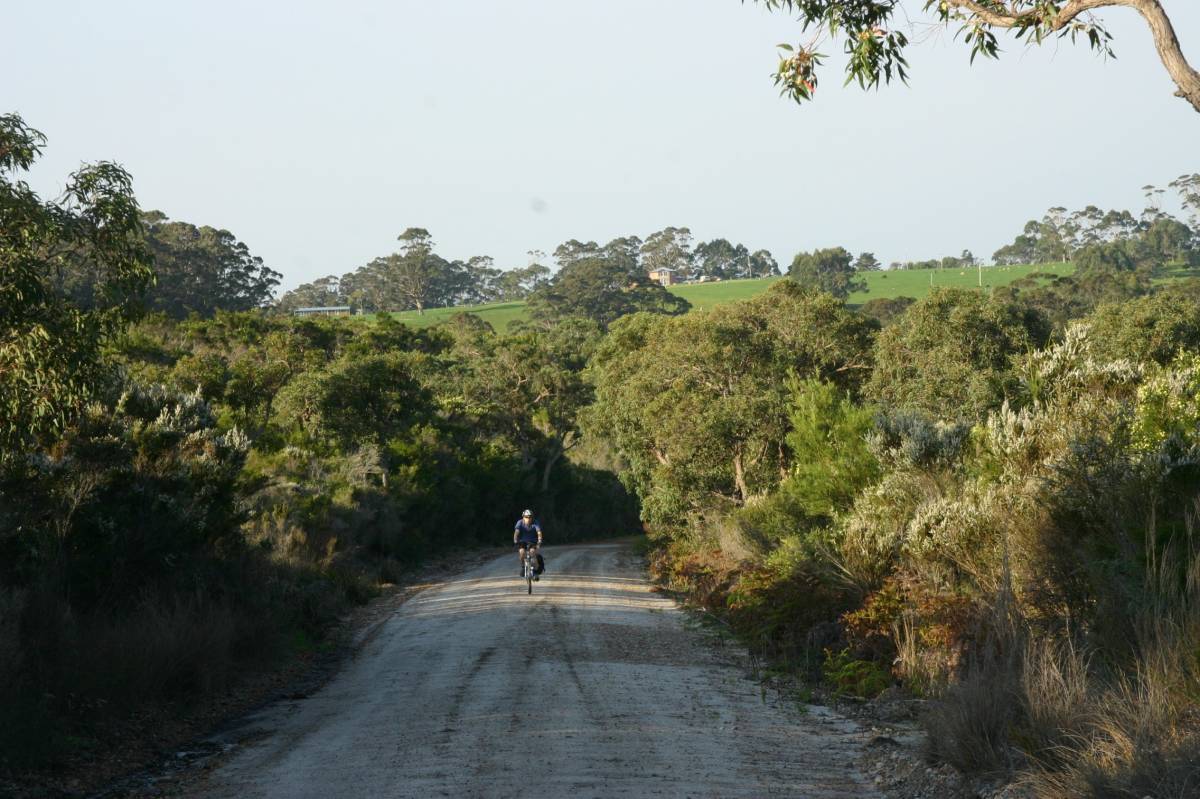 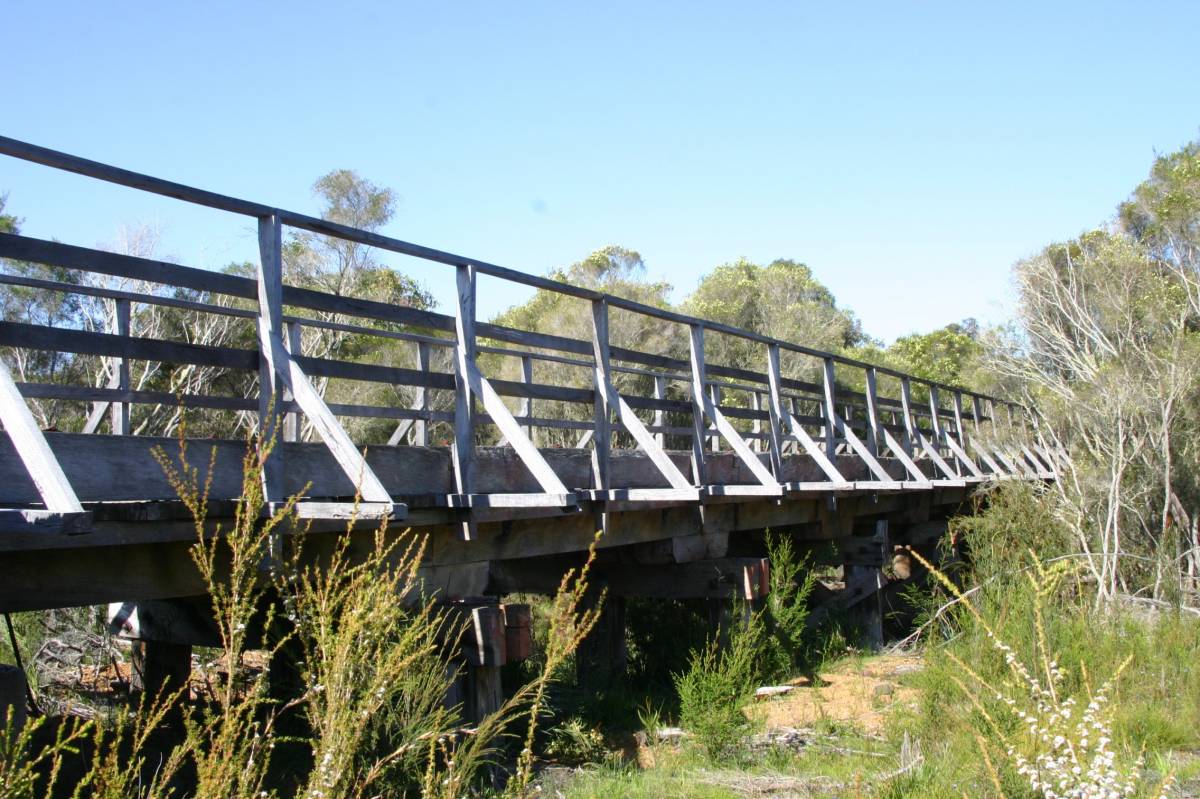 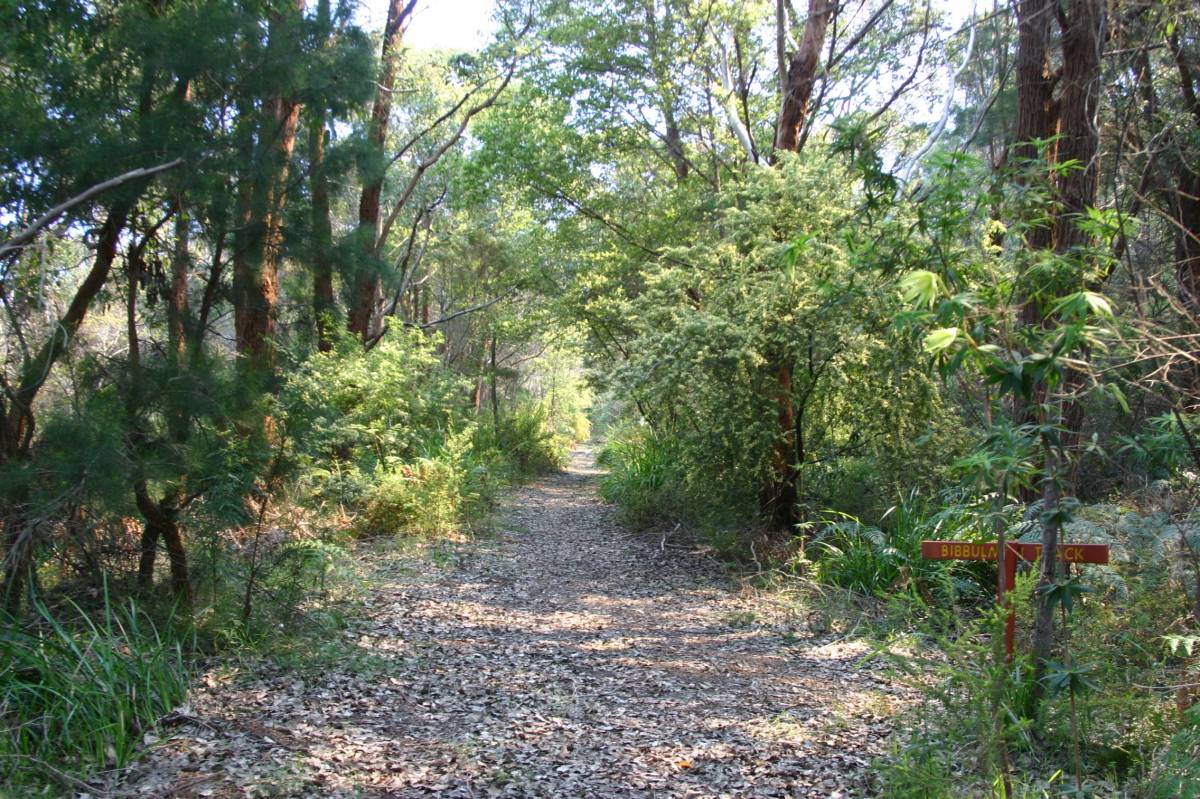 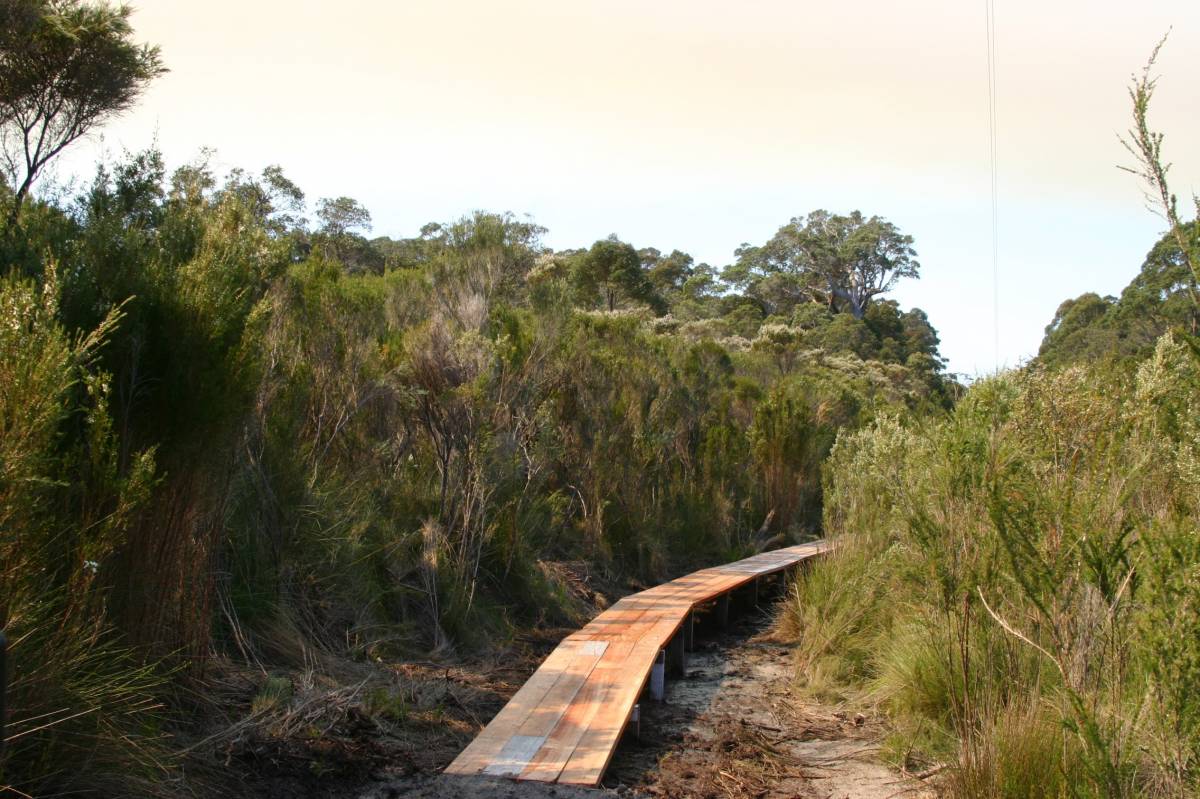 Board walk in the section near Nut Rd, near Nornalup. (2006) 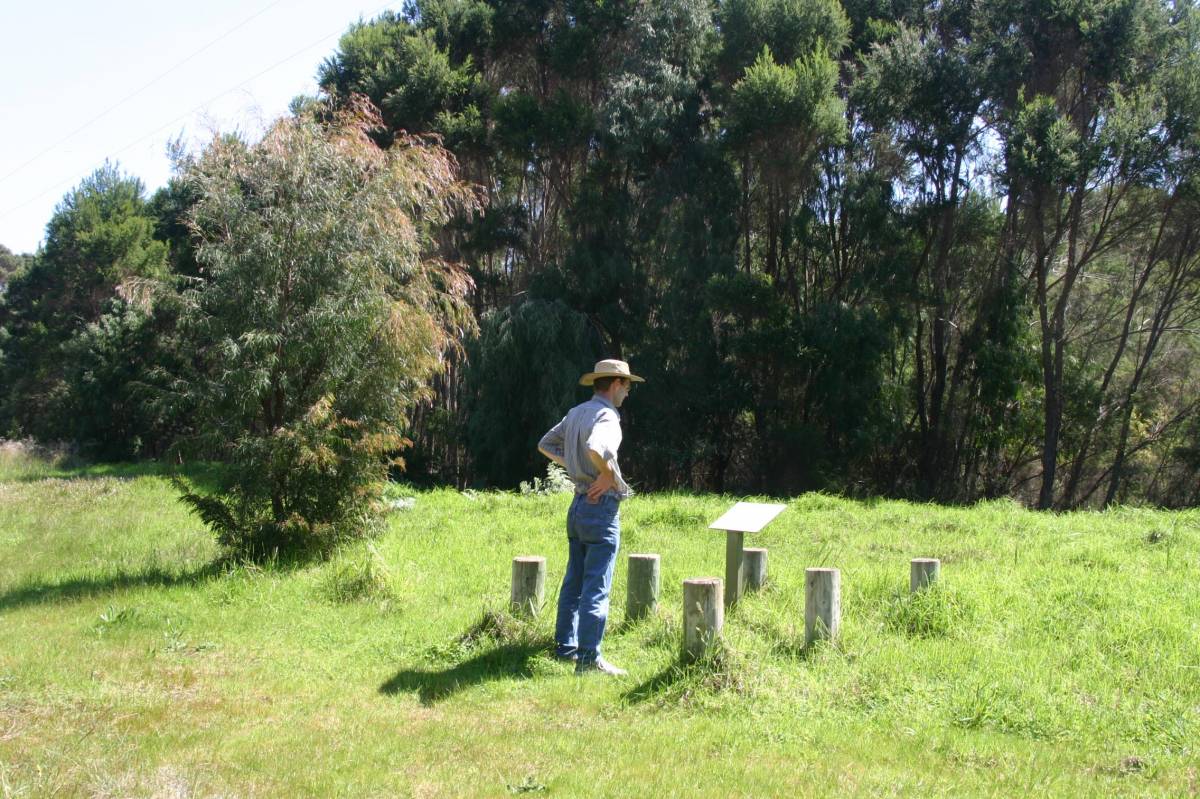 The Rail Trail Terminus at Nornalup (2006) 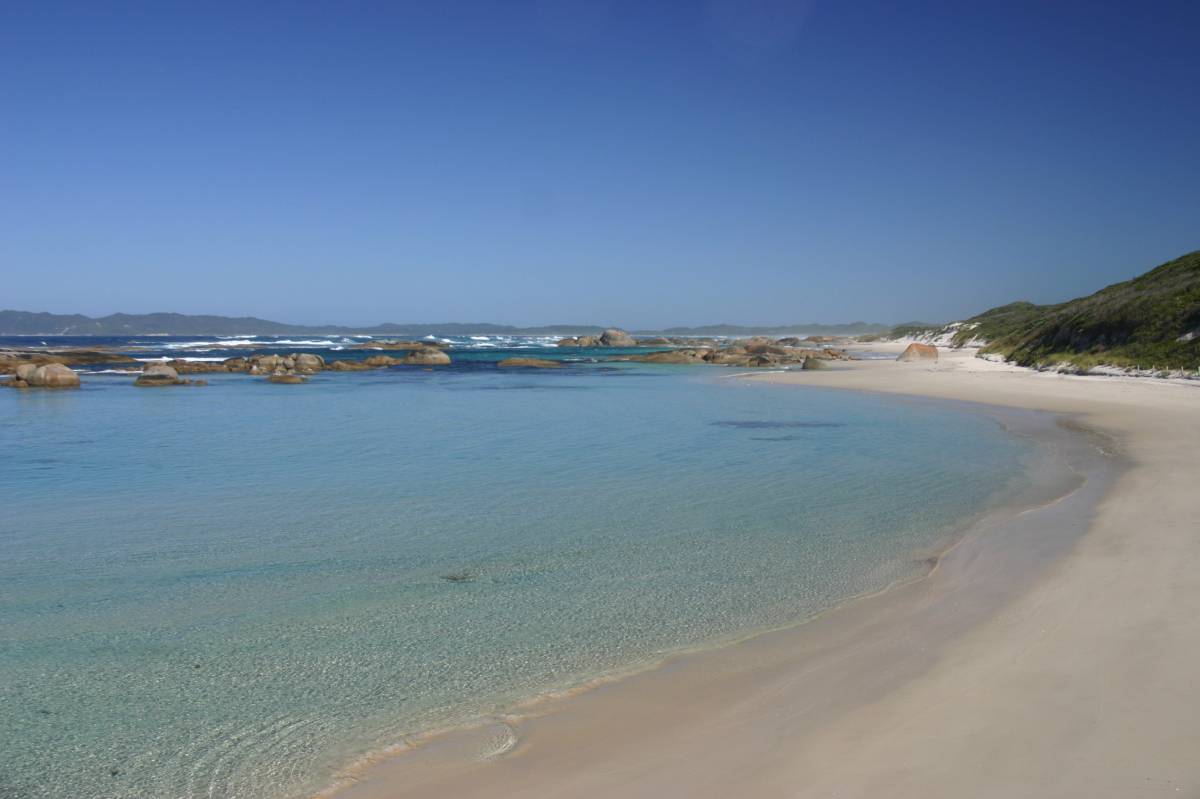 Green's Pool near Denmark is another attraction

South of Pemberton, 340 km from Perth 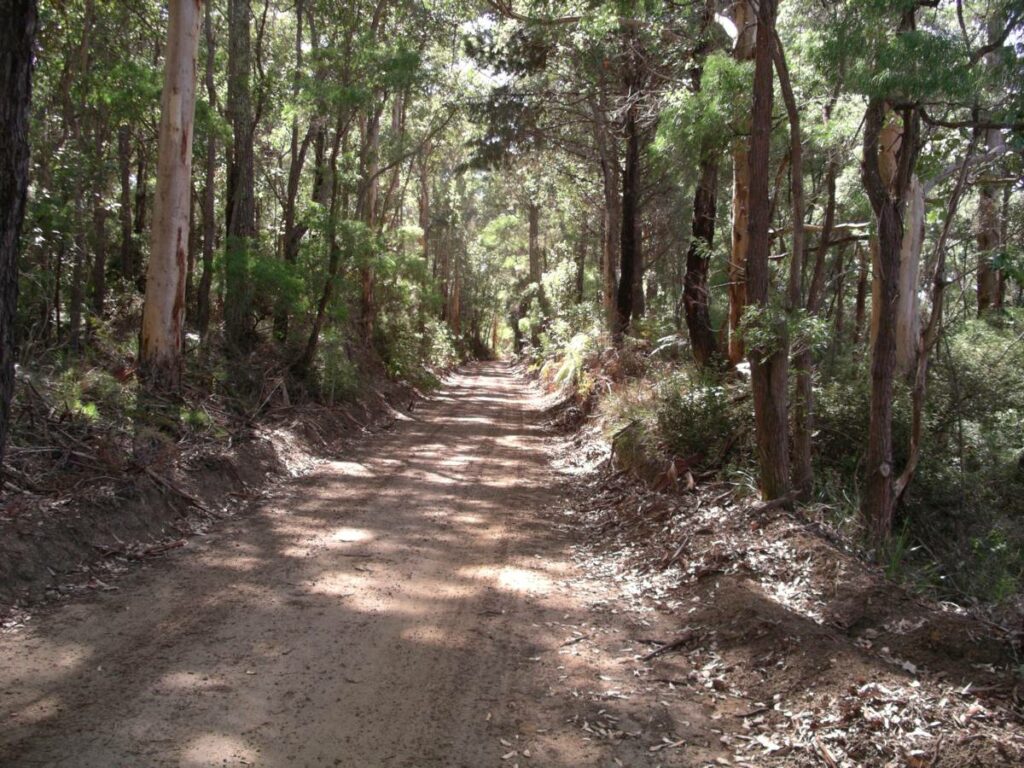 South of Pemberton, 340 km from Perth