This trail features the 105m high Montezuma Falls. Traversing lush rainforest with leatherwood, myrtle and sassafras, the trail follows the route of the former North East Dundas Tramway which ran from Zeehan to Williamsford. Williamsford was once a busy mining town but is now slowly being reclaimed by the bush. The trail is in two sections: walking and cycling is allowed on the 5.5km from Williamsford to the falls; 4WD vehicles are allowed on the 14km between the Melba Flats and the falls. This trail connects with the 9 km Melba Flats to Zeehan Rail Trail at Melba Flats

We acknowledge the Toogee people, the traditional custodians of the land and waterways on which the rail trail is built.

Funding had been announced some years ago to extend the rail trail another 42km back to Lilydale and potentially all the way back to Launceston linking with the Rocherlea Rail Trail and the Launceston urban cycling network.

At the time of writing, the planned extension to Lilydale is being challenged by a Heritage rail group wanting to establish tourist rail services on the old line all the way to Scottsdale. Another government inquiry into the feasibility of this proposal had recommended a compromise with the Heritage Rail group being given access to a short section from Turners Marsh to Lilydale, while the longer section from Lilydale Falls to Scottsdale be developed as a recreational trail for walkers and cyclists but any progress remains stalled.

Many would also like to see the trail continue a further 2km from Tulendeena/Billycock Hill down to the township of Legerwood and then another 10km onto Branxholm via the old rail corridor.

Branxholm has a new, easily ridden 8km cycle trail connection – the Valley Ponds trail – linking it to the mountain bike mecca of Blue Derby with trails suitable for all levels of MTB ability. The small, once dying towns of Branxholm and Derby have taken on a new lease of life and are now thriving with the influx of cyclists to these magnificent trails.

The initial surveying of the North East Dundas Tramway was initiated in 1895, and the first section was being used by 1897. The line was used to carry ore from the Williamsford mines to Zeehan. The official opening of the tramway from Zeehan to Williamsford (Where the car park area for Montezuma Falls is situated) took place in 1898.

The tramway used a narrow gauge of rail, which is why it was regarded as a tram line, and not a rail line.   The narrow-gauge (2 ft) was chosen because of the extremely difficult terrain that the railway crossed, requiring several big trestle bridges, including the 48 metre long one at the foot of Montezuma Falls.  After heavy rain, the engine and carriages would get soaked by spray from the falls. 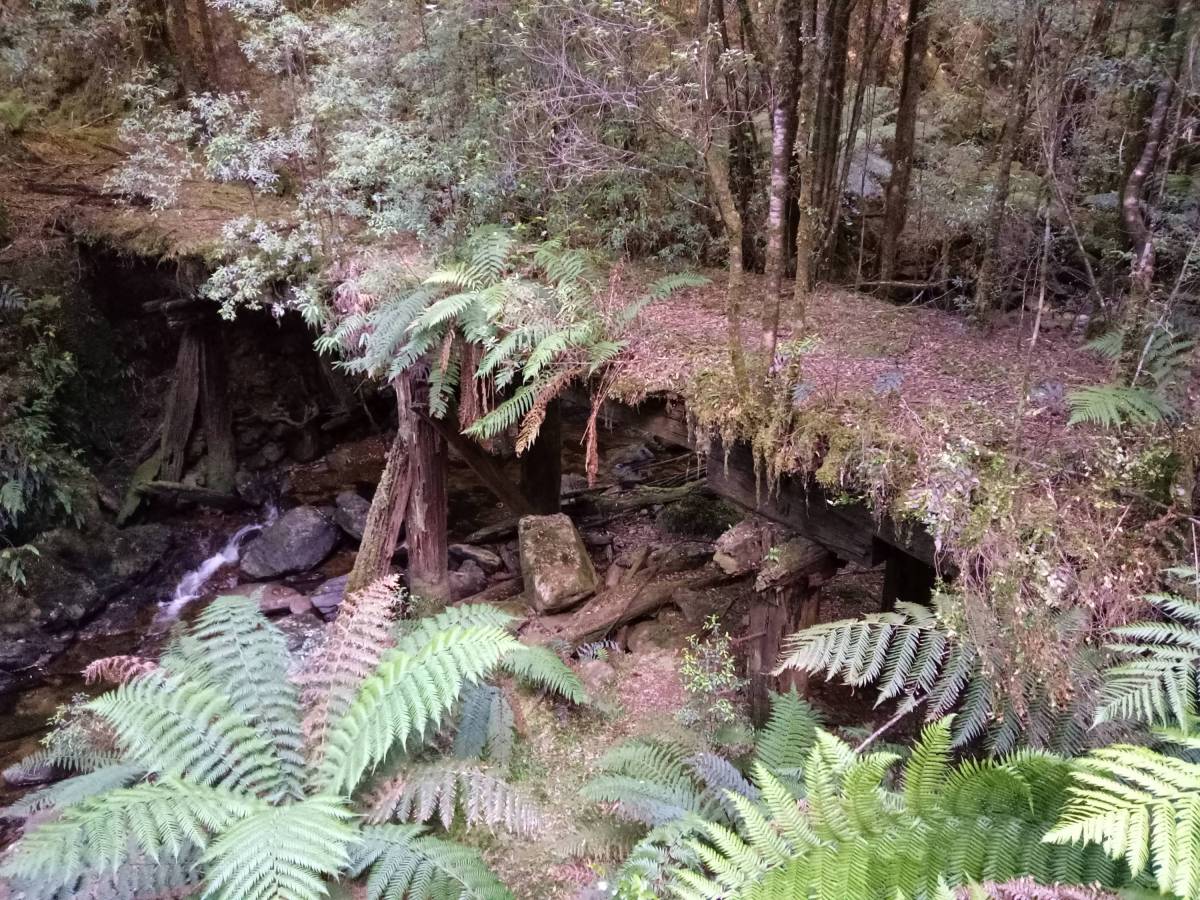 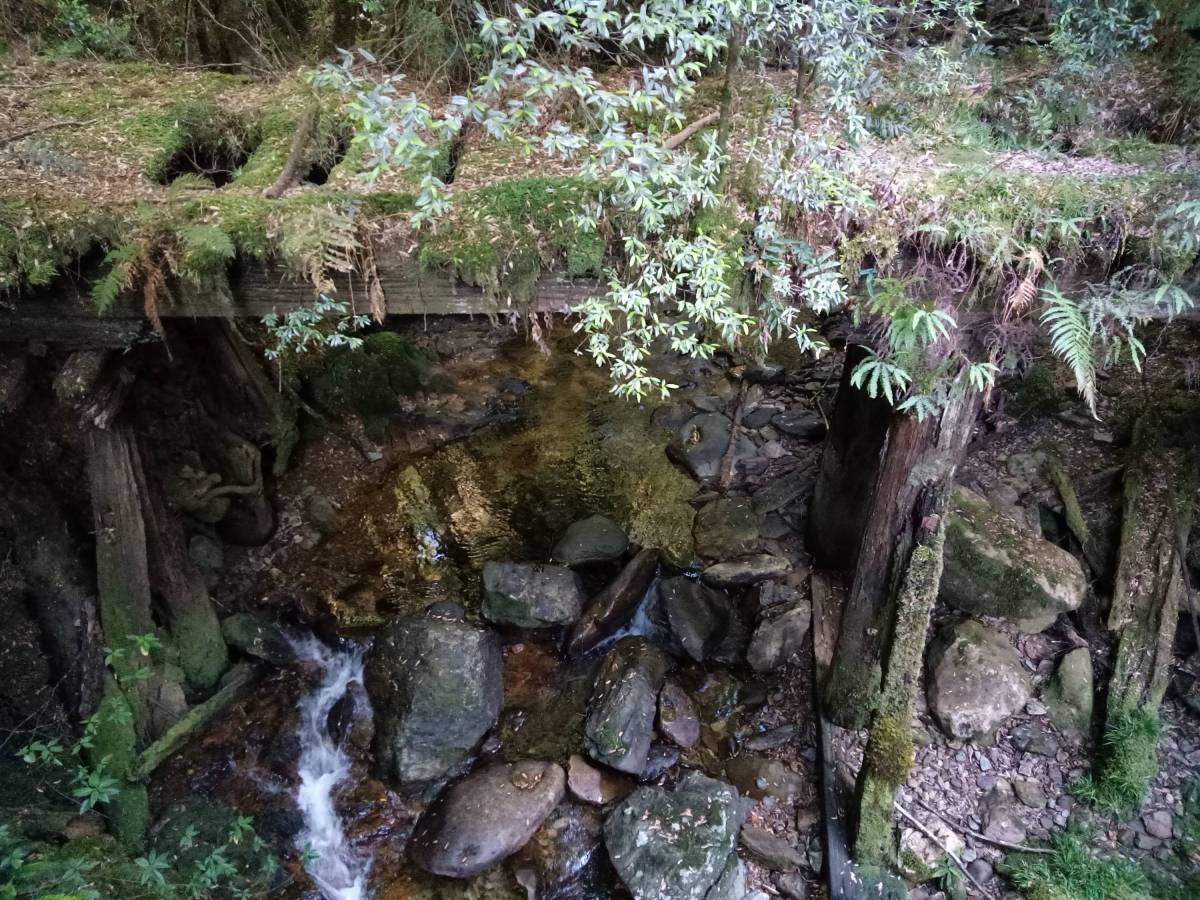 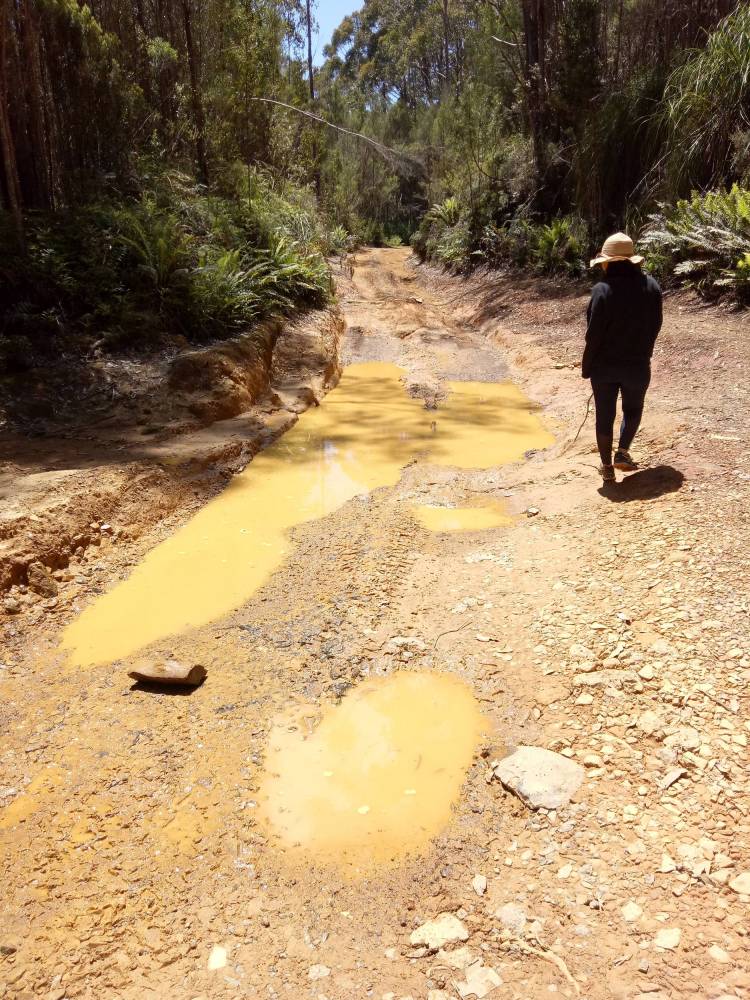 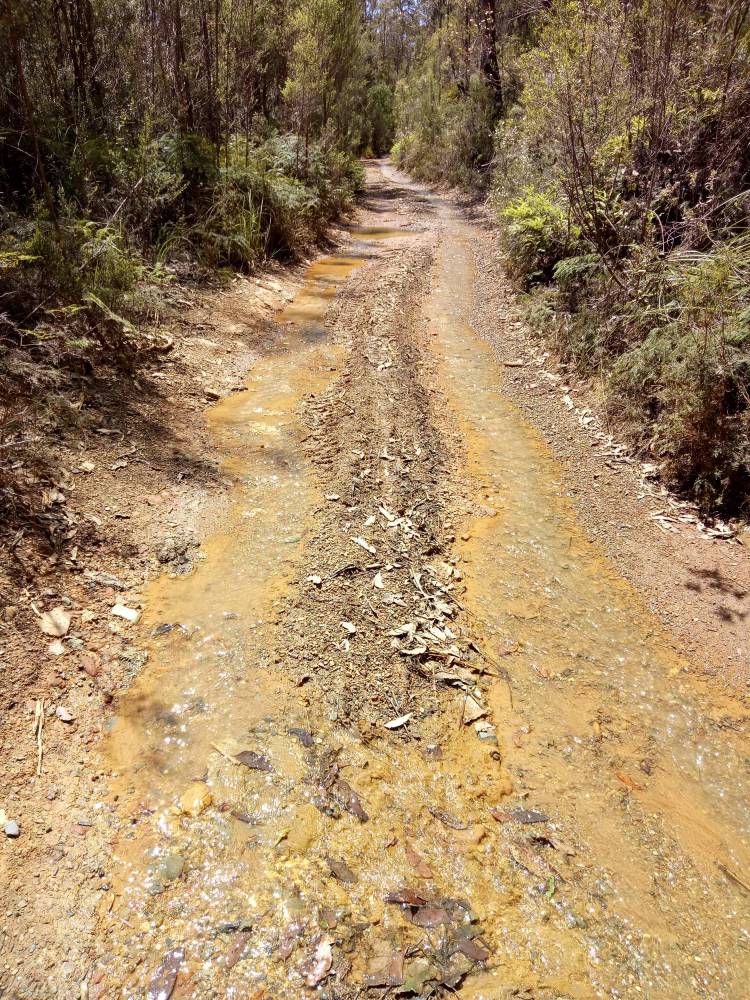 Just before Christmas 2019 we walked for ~1.5 hours with numerous stops from the Melba Flats end of the trail on the Murchison Highway towards the Falls, then returned the same way. Trail was a gentle rise heading towards the falls. Trail was reasonable condition, with some deeper holes from 4WDs. Conditions were dry at the time so I expect after rain it would be quite muddy in places. Surface is more clayey and less gravelly than many trails. Best for cycling on mountain bikes and slightly more adventurous than many trails. All in all a great ride through the Tassie bush. Note you can continue into Zeehan from the Murchison Highway – as described on this site and some MTB sites on the area.

We walked the 5.5km Williamsford to Montezuma Falls section of this trail late one afternoon in January 2019. Beautiful trail through the forest above the Ring River. The falls are great and suspension bridge is fun. The trail was a little muddy in places and there is a short, steep section to get on to it at Williamsford, but it was generally well maintained. We did not encounter trees or rockslides covering the track as in the previous comment.

We recently rode the first 5.5kms of this trail as a family with 2 kids, and the falls at the end were beautiful BUT this is not your ordinary rail trail. Firstly it is obvious the trail has not been maintained in a very long time,there are multiple very large trees and rock slides covering the track, meaning we needed to carry the bikes over and under the trees to keep going. The trail is very wet and muddy, I would not attempt it on any less than a mountain bike. The trail is a long way from anywhere. If you are coming from Strahan it is approx a 1 hour drive on winding roads. We were considering doing the second part to Melba Flats but it took us about an hour to ride the 5.5km to the falls so I would hate to think how long the remaining 14km would have taken us . Other than that the kids loved getting muddy and playing at the falls just be prepared with a full change of clothes for the drive back. 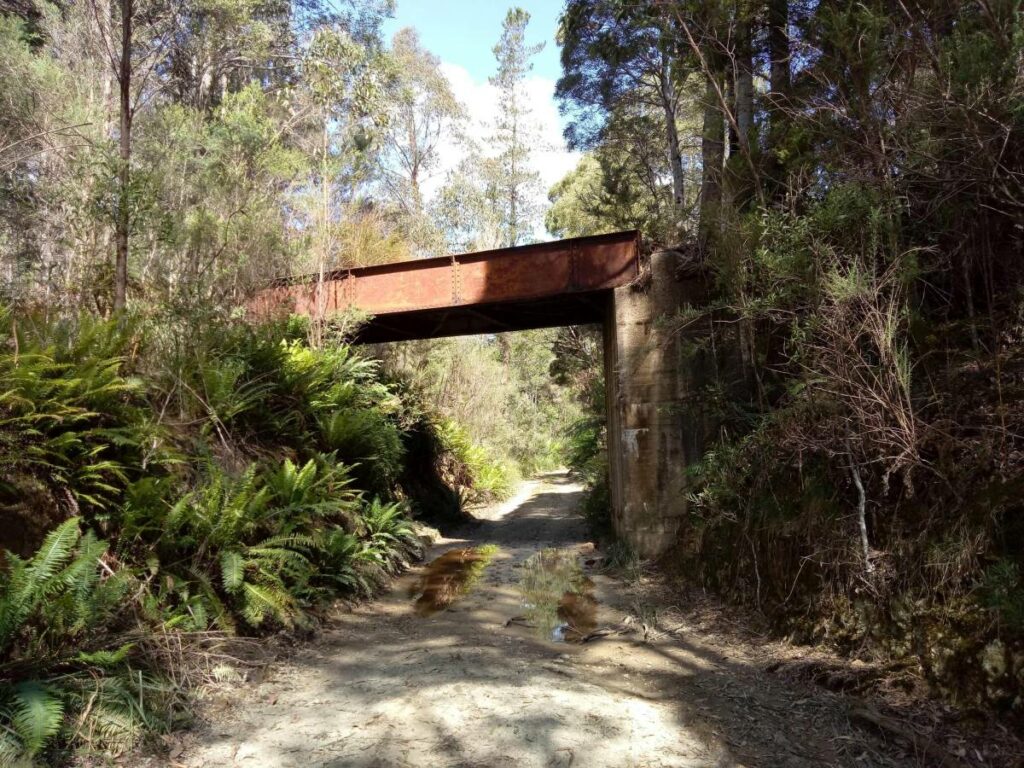 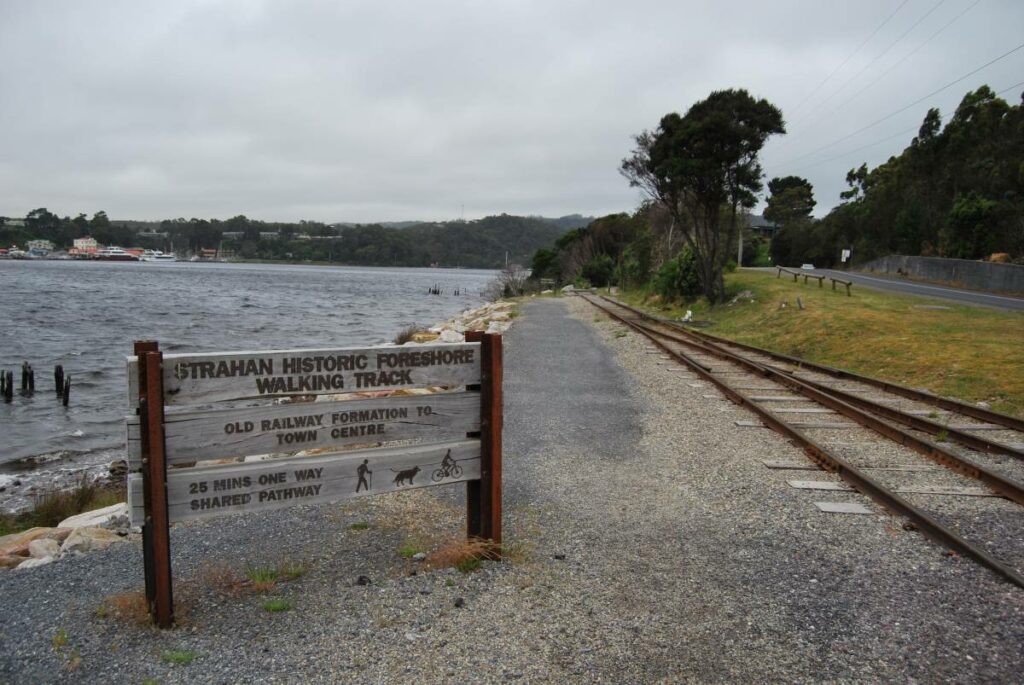