The entire walk is in beautiful  natural forest away from the fast moving Gold Coast.

View the old Ernest Junction station sign located at the end of the tunnel.

There is signage and seating at the eastern end of the tunnel.

View the 131 year old stone culvert under the railway line on the western side of the tunnel.

Parts of this former line are accessible on foot. These sections are mainly west of the Parklands Drive/Smith St intersection.

The tunnel itself is curved, preventing one end from being seen from the other and has been described as ‘spooky’. 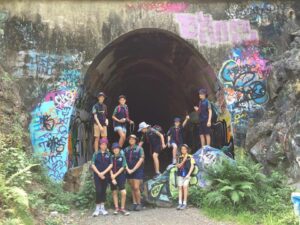 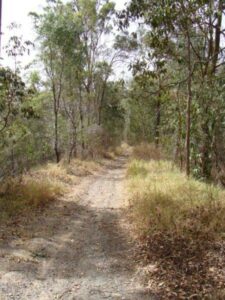 Looking from the highway off-ramp towards Napper Rd (2009) 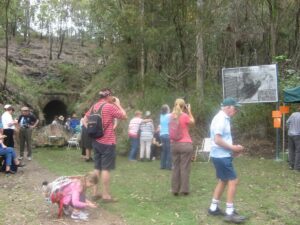 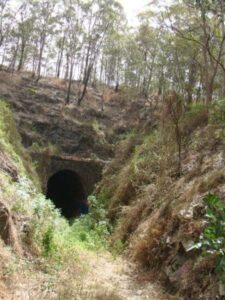 The eastern entrance of the tunnel under Ashmore Rd (2009)

We are starting up a “friends of….” group here on the Gold Coast to clean up and gently monitor the Ernest Junction Tunnel. Anyone who is interested could get in touch with me on deboertj@optusnet.com.au.

Visit the friends of the tunnel Facebook page https://www.facebook.com/groups/ErnestJunction

If you would like to join the working group please email Judith at  deboertj@optusnet.com.au

The former Southport railway line branched off the main line to Tweed Heads at a station called Ernest Junction just South of the tunnel.

The Southport Branch line headed generally east, across Activity Crescent, then along what is now Smith St. Motorway beside the Griffith University. The line crossed Wardoo St, Ewan St and George St. beside what is now St. Hilda’s School then across High St. to the old Southport station situated at current  Southport Bus interchange.

The bridge was constructed in 1903 as part of the South Coast railway line.

The Currumbin Creek rail bridge is a 21 span, 173 metre long steel railway bridge. It is one of only three examples that still exist of infrastructure associated with the original railway line and the only structurally complete bridge still in existence on the line. It was closed to rail traffic in the mid 1960s and became primarily utilised to support a number of utility services (water and sewer) whilst simultaneously functioning as a narrow pedestrian bridge

The bridge was upgraded in 1994 to a dedicated pedestrian bridge by relocating the utility services and replacing the original timber railway sleepers with plywood decking, asphalt surfacing and pedestrian barriers.