The bustling tourist town of Strahan lies on the northern end of Macquarie Harbour.

The trail follows the foreshore, offering wonderful views of the historic town and its harbour.

Now a fully sealed, concrete trail, it follows the former railway that connected the Abt rack railway from Queenstown with the main line north to Zeehan and Burnie.

The Abt railway is now an operational tourist railway which operates daily.

Strahan has many wonderful attractions and activities for visitors.  Some are listed here

Strahan is the departure point for the West Coast Wilderness Railway

Nearby, in Macquarie Harbour is Sarah Island, once a notorious convict prison

The sign near the centre of town marking the site of the trail and former railway. (Dec 2010) 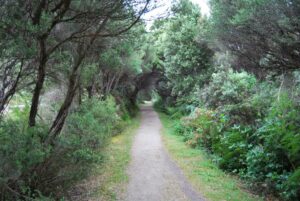 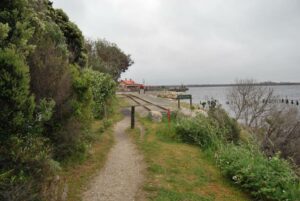 The trail head at Regatta Point Railway Station, the start of the Abt Railway to Queenstown. (Dec 2010) 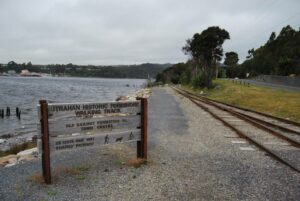 Sign marking the start of the trail at Regatta Point Station. (Dec 2010)

One review of “Strahan to Regatta Point Rail Trail”

Walked on sections of this trail in January 2019. A popular walking and cycling trail with locals and tourists. Lovely way to see the harbour and the waterfront part of Strahan township.

To contact us about this rail trail, email tas@railtrials.org.au

We acknowledge the Peerapper and  Tommeginne people, the traditional custodians of the land and waterways on which the rail trail is built.

The railway was built from Queenstown to Strahan by the Mount Lyell Mining Co. which  began operations in November 1892. The railway officially opened in 1897, and again on 1 November 1899 when the line was extended from Teepookana to Regatta Point and Strahan.

Due to the extremely rugged terrain and lack of roads at the time, the railway was the only way to get copper from the mine at Queenstown to markets.

The railway utilised the Abt rack and pinion system for steep sections. Because of the steep gradients and many tight turns, the chosen gauge was the narrow 3 ft 6 in (1,067 mm)

The original line continued into the Mount Lyell mining operations area in Queenstown, and at Regatta Point the line linked around the foreshore of Strahan to link with the Government Line to Zeehan.

The railway ceased operation on 10 August 1963 due to increasing maintenance costs and the improvement of road access to the West Coast from the north with the opening of the Murchison Highway. The last train run was hauled by the same locomotive that ran the first service (no.1 in 1896 was the first engine to steam into Queenstown). The rail and other movable items were lifted taken off-site, leaving most of the bridges intact.

Despite various proposals post 1963, it was not until the 1990s some very committed local West Coast people campaigned for the restoration of the Abt Railway as a heritage tourist attraction featuring the unique rail system and the community’s mining history.

The restoration of the Abt Railway was made possible through the allocation of $20 million from the Federal Government’s Prime Minister’s Federal Fund, with further funding from the State Government and some private investment.

The restored railway commenced operations on 27 December 2002 as the Abt Wilderness Railway, with the new terminus in Queenstown. The station at Regatta Point terminus has been renovated. 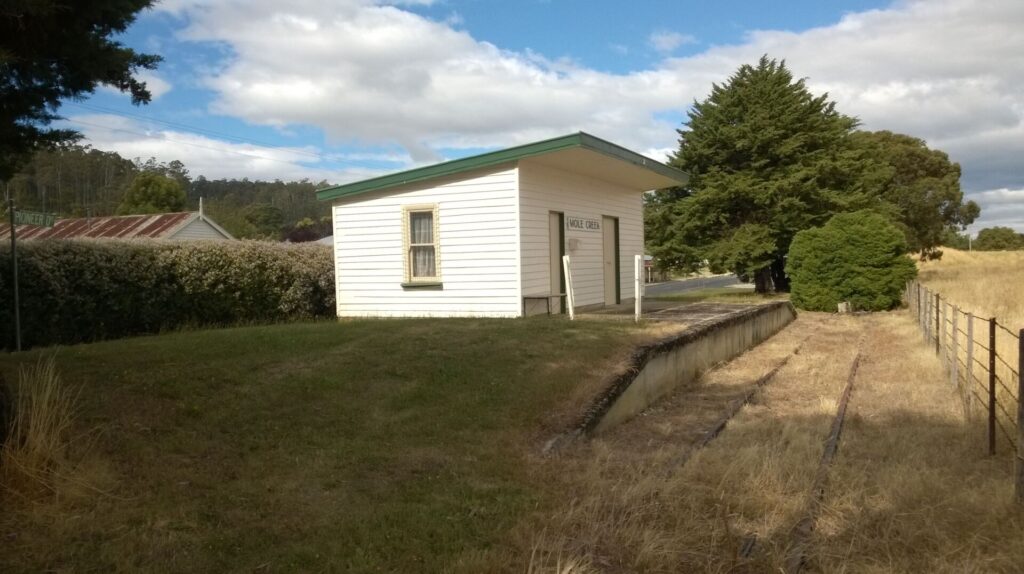