The Stenhouse bay jetty and township and the Inneston township were developed in the early 1900s to support the mining of gypsum. The gypsum was mined at Inneston and transported on a horse drawn train to Stenhouse Bay jetty. The Thompson Pfitzner trail follows the gypsum railway line.

As the trail is located within the Dhilba Guuranda-Innes National Park, a park entry fee is payable at the park entry office. The office is located on the main road just before Stenhouse bay.

The trail is best travelled between Autumn and Spring when the weather is cooler. Spring is perhaps the best time as the wildflowers are in bloom

The trail commences just west of Stenhouse Bay on the Pondalowie Bay Road. There is a small car park on the right just past the National Park depot storage sheds. An original gypsum train carriage is located at the northern end of the car park.

The trail is relatively open as it commences however the bush has regenerated over the past century since the land was cleared for the railway and the trail is soon enclosed by small trees and shrubs. The trail climbs slowly to approximately its mid-point and then descends toward Inneston. Along the trail you may find lengths of the steel rails that replaced the original timber rails that were eaten by white ants.

Arrival at Inneston is like walking back in time into a 1913 isolated mining township. Inneston had a population of 150 people and included facilities such as a public hall, butcher, baker, bank and a post office. It sounds idyllic but these people were very isolated and had to occupy themselves which they did by building a tennis court, cricket oval and other recreational facilities. The great depression of the late 1920s saw a decline in building work and gypsum production ceased leading to the gradual closure of Inneston. Today you can walk around the town and see most of these buildings, or what remains of them, and the seven renovated heritage buildings that now serve as tourist accommodation.

Take time to look at the Gypsum crushing plant on the edge of Inneston Lake. The steel rails of the gypsum train line are still visible next to the crushing plant.

The Thompson Pfitzner Rail Trail forms a small section of the 500km Walk the Yorke trail which follows the entire coast of Yorke Peninsula. The trail is primarily for hikers however there is a cycling trail (on and off road) that follows the Walk the York walking trail. The contact details below will provide information on smaller sections of the trail that are easier to walk and are often the most scenic. 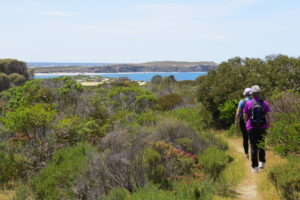 view of Stenhouse Bay from the trail 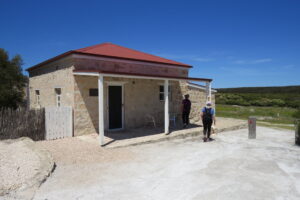 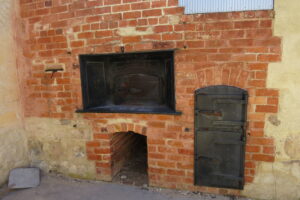 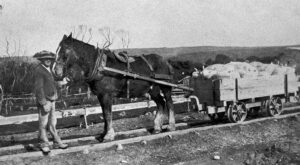 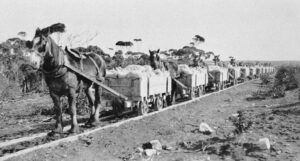 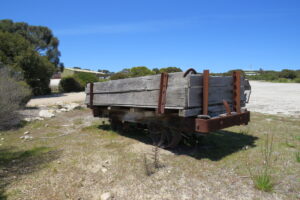 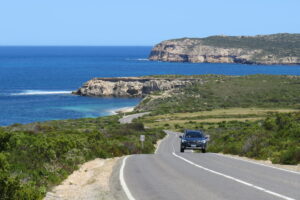 The trail is managed by

We acknowledge the Narrungga people (Dilpa clan), the traditional custodians of the land and waterways on which the rail trail is constructed.

The trail was named after Bill Thompson and Adolf Pfitzner who managed the horses for the railway. Their job was not easy. Derailments occurred due to heavy loads and white ants eating the timber rails. Within a few years, the wooden rails were replaced with steel rails. Modified tractors replaced horses and finally locomotives continued the work.

The trail ceased to operate after the Great Depression in 1930 and native vegetation has gradually returned.