5 based on 4 reviews
Mark as favourite Mark as visited

UPCOMING WORKS: You may notice some people on the section of the Northern Rivers Rail Trail from Casino to Bentley over the next few months. They will be conducting a variety of works necessary for the rail trail project, including minor vegetation clearing and access point upgrades, spraying of noxious weeds in conjunction with the clearing, a biodiversity assessment, and an aerial survey commencing beginning of June 2021.

Condong to Crabbes Creek (24 km), funded by the NSW and Federal Governments.

This takes the trail to final design and construction planning, with construction to begin in September 2021; the trail should be operational and open by March 2023.

This 24km section passes through hills and includes several tunnels.

The picturesque town of Murwillumbah is close to the large population centres of Tweed Heads and the Gold Coast, and less than 30 minutes from the Coolangatta/Gold Coast airport, making access easy for visitors further away.

Casino to Bently (13.5 km), funded by the Federal Government. A draft master plan will be  completed by December 2021.

The NSW Government gave approval in June 2021 for Richmond Valley Council to move to a detailed design and construction stage for this section. Construction will be managed by Council, eliminating the need for a tender process; this should see construction begin soon, at a date to be announced.

Council has included the rail trail as one of its top five projects for grant funding, and a petition asking for funding for the section between Bentley and Eltham has more than 1520 signatures.

A multi-modal trail for trains and a rail trail. Council is currently concentrating on the section from Sunrise in Byron to Tyagarah, hoping for around $200,000 in funding so the line can be cleared to allow the engineering company to view the bridges in detail. 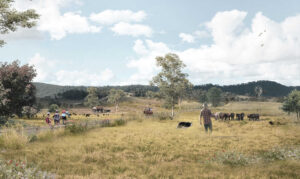 Artist's impression of an idyllic Casino to Bentley rail trail when opened in 2022. 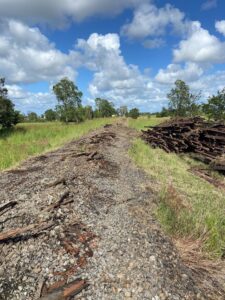 Track removal in progress between Casino and Murwillumbah [May 2022] 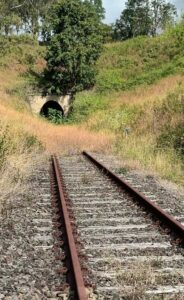 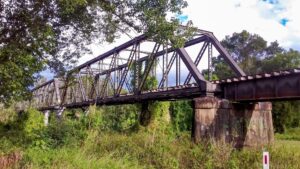 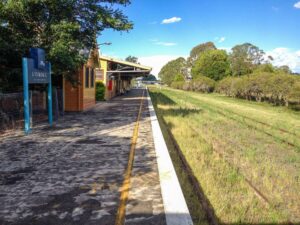 Lismore Station will once again become a part of community life. (2013) 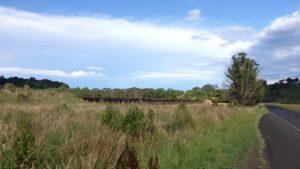 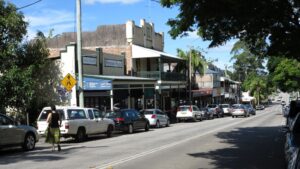 Bangalow is a town with great character (2016) 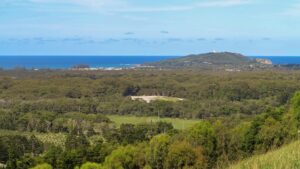 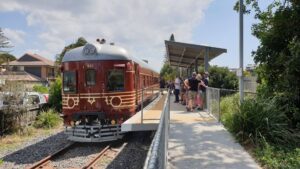 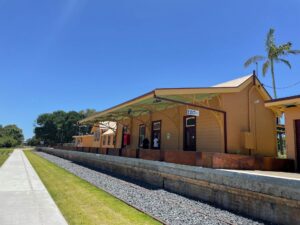 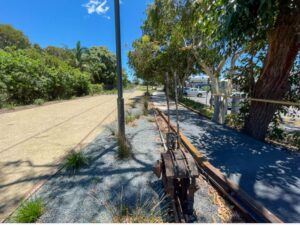 Burringbar Ck bridge, one of several between between Burringbar and Murwillumbah (2017) 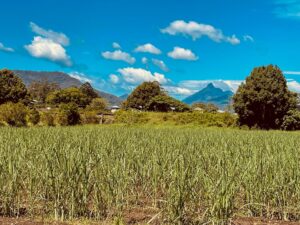 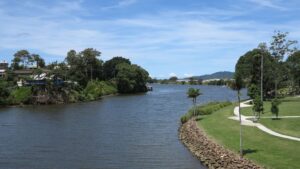 The beautiful Tweed River at Murwillumbah (2016) 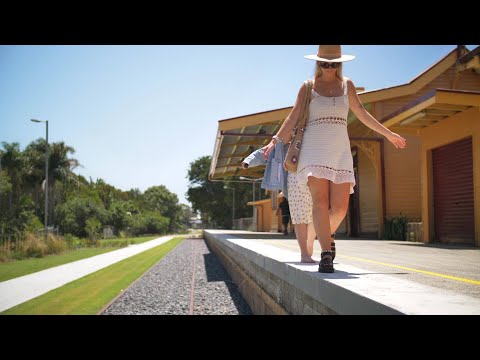 See the experiences and benefites this wonderful new rail trail will bring.

Situated directly on the South Murwillumbah railway station platform ready for the upcoming Northern Rivers Rail Trail, we have the privilege to serve our customers by offering our amazing high-end bicycles designed by ‘Specialized’. Our bikes range from full suspension mountain bikes and hardtail, road and gravel bikes through to active commuters and, of course, our exhilarating E-Bikes, Turbo Levo, Vado and Como IGH for maximum safety, comfort and luxury. 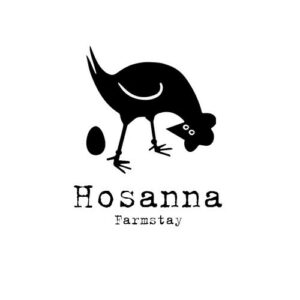 Hosanna Farmstay is all about celebrating good old fashioned fun with an immersive experience in nature and farm life – it’s the perfect place to relax and disconnect from busy routines and enjoy time with family, friends, and nature, in a gorgeous rural farm. Located in the Tweed Valley, just 10 minutes from Murwillumbah, offering families an easy escape to the country and providing authentic country camping that is rustic, simple, comfortable and free-range. Also has glamping huts, charming wooden cabins and an expansive Homestead.

Super excited about the upcoming construction and opening of our beautiful Tweed Valley Rail Trail and the Murwillumbah to Crabbes Creek section.
We are extremely proud to support this project and be part of a new era. We will be looking forward to welcoming visitors to the trail. We have lots of great plans for the future and looking forward being part of this historical moment. We and our team will give our best to leave you with amazing memories riding our trails.

This soon to be realised and much needed Northern Rivers Rail Trail will become a wonderful way for locals and tourists of all ages and abilities to cycle and walk, away from our dangerous and busy main roads and poorly maintained secondary roads that join our beautiful hinterland villages. So looking forward to seeing people of all ages and fitness levels out exercising and exploring. Eco tourism will bring new life and sustainable economical benefits to areas well away from the overdeveloped Tweed coastal strip and footpaths.. Bring it on!

I have enjoyed rail trails in all the eastern states, and made multiple trips to NZ rail trails. The Northern Rivers area has so much potential – due to its striking topography, ideal climate, scenic villages and conservationist culture. The new rail trail will benefit both locals and visitors.

This enthralling area of NSW has always impressed me. Recently during a visit, I discovered much of the rail corridor and could not help but notice what an amazing riding experience this would be. Many countries are embracing rail trails and local economies are benefiting from the upturn in eco tourism. Just because a person rides a bike, does not mean that have no money to spend! Unfortunately I am now based on the other side of Australia, but I will support the development of this unique rail corridor wherever I can.

Northern Rivers Rail Trail has been the key local organisation promoting the development.

For more Information, contact Marie Lawton on marie.lawton@northernriversrailtrail.org.au or phone 0434 552 283.

We acknowledge the Bundjalung  people, the traditional custodians of the land and waterways on which the rail trail is built.

Transport for NSW completed a Casino to Murwillumbah Transport Study in 2013, following significant community requests for the return of passenger trains. The study evaluated the feasibility, benefits and costs of reinstating passenger services in the context of the current and future transport needs of people living in the study area, and potential connections to the South East Queensland public transport network.

The study found the line would not meet current or future transport needs and there were no significant opportunities with freight or tourism that could improve its viability. It determined that the rail infrastructure has deteriorated significantly, and more than $900 million would be needed to carry out the work required to ensure the system complied with safety and operating standards for frequent and reliable train services.

The rail line does not serve the major growth corridor between Lismore, Ballina, Byron Bay as well as the rapidly growing Tweed region and connections to South East Queensland. The study recommended investigating improving bus services to provide more people with frequent, cost-effective public transport to key destinations, rather than reinstating the rail line. Improvements could include increased services on key routes, better integration of timetables between services, changing other routes to include key destinations such as education campuses and hospitals, introducing new express services on the Pacific and Bruxner Highways, and improving passenger information. It recommended that the rail remain closed. The study noted that there is community interest in using sections of the rail line for a rail trail and, subject to stakeholder interest, this could be investigated further to test costs, benefits and feasibility.

The corridor has 145 timber bridges, 13 steel bridges and nine substantial tunnels, and reinstating and maintaining rail service to current safety standards will be an expensive option.

The Casino to Murwillumbah Rail Trail Study was commissioned by Ballina MP Don Page following the release of the Transport study. Released in June 2014, it states that a 130 km rail trail on the Casino to Murwillumbah corridor would have economic benefits to local communities as well as creating employment opportunities. Given the large number of timber bridges and tunnels on the corridor the estimated cost of construction is $75 million, with an estimated annual cost for maintenance between $884,000 to $ 1.15 million; significantly less than the cost of returning trains, and expenditure that would pay for itself within five years.

The line connected Casino (on the Sydney to Brisbane main line) with Lismore, Byron Bay and Murwillumbah. The first section opened between Lismore and Murwillumbah in 1894, connecting the Richmond and Tweed Rivers. Passengers and goods were transported to Sydney by coastal shipping from Byron Bay. Nine years later, an extension from Lismore to Casino opened (later south to Grafton; it was not until 1932 that the line was fully connected with Sydney).

As early as 1889, feasibility talks took place into extending the line north from Murwillumbah into Queensland. The line became a branch line in 1930 when the North Coast main line was extended from Kyogle into South Brisbane.

The Casino to Murwillumbah railway line ceased operations in 2004.

Leycester Creek Bridge at Lismore will be a real ...

With the good run of dry weather in the Northern Rivers, work is progressing well ...

After the devastating floods that struck the northern NSW and SE Qld this year, some ...

There is a bridge in there somewhere! Construction ...

The test surface (with rail track removed) has had ...

Rail trail lovers excitement is growing in the Northern Rivers of NSW with the commencement ...

Lismore Station will once again become a part of ...

The Richmond Valley Council received notice from the NSW state government to move to Phase 2 (...

Wonderful news with the Tweed Shire Council approving construction on the first section of the ...

Construction of theTweed Valley section of the Northern Rivers Rail Trail in NSW is near, ...

As we wait for the awarding of the contract and design for the construction of ...

Here is a summary of the progress from closure of rail services to the beginning ...

Northern Rivers Rail Trail in NSW will soon be a reality

Momentous news was received this week --- the second rail trail on a former government ...

Naughtons Gap tunnel will be a feature of the ...

What’s been happening on the Northern Rivers Rail Trail?

The Northern Rivers Rail Trail committee want to raise $75,000 for the design costs of a ...

A RAIL trail spanning the 130km length of the Casino to Murwillumbah line could be ...

The minister for the North Coast of NSW, Don Page MP, announced on Friday 23rd ...