The distance to ride the full trail is 137km. However there are currently several inaccessible trail sections in different places requiring on road bypasses to complete the full trail. The full trail includes 28km of formalised bike path and 61km of unmaintained gravel tracks and roads of varying quality of the former rail corridor, and 48km of public road connections to bypass the inaccessible sections. The full 137km route can be viewed and downloaded HERE.

In contrast, the unmaintained sections of trail have no signage and are best for those with a sense of adventure who are prepared to travel through remote areas. Most of the unmaintained trail takes riders on service roads and through Crown land adjacent to the old rail corridor. Where this is not possible, routes on public roads enable riders to connect with other sections.

The trail winds through dry savanna and creek habitats; creeks can be crossed all year except during the January-March monsoon season. The trail is popular among Darwin mountain bike riders and is gaining popularity. To see the TopEnd Bike Tracks route, including a full cuesheet, click HERE.    Don’t forget to use the settings to go back to metric distances.

Most of the undeveloped parts of the trail are poorly maintained; loose gravel or sandy sections require care. Sections from Darwin River to Adelaide River are in very remote areas with limited services: carry enough water, bike spares, a first aid kit and food, and have studied or downloaded maps. Several river and flooded crossings may be impassable for periods in the wet season, so seek advice from the Friends of Darwin to Adelaide River Rail Trail Facebook page.

Darwin CBD to The Narrows (4 km)

The start of the rail trail accessible from the corner of Daly and McMinn Sts, or via the Stuart Highway underpass (the only bridge over the original NAR) that can be reached via the Garramilla Boulevard bike path and Harvey St.

In Stuart Park there are two options:

The second option will take you to a small section of preserved rail in the garden bed at the intersection of Stuart Hwy and Salonika St, which was part of a spur line to Vestey’s Meatworks, and further on, a short (1 km) detour down Parap Rd to McDonald St will take you to the old Qantas Hangar where you can see the restored and heritage listed ‘Sandfly’, the original locomotive used during construction of the railway in 1888.

Off Parap Rd are Somerville Gardens and Railway St where railway workers lived. While none of the original dwellings remain, the Railway Club is located where the original social and workers club was in this street, which is named after James Somerville, a former manager of the railway in 1909. To rejoin the rail corridor, cross Stuart Hwy at Parap Rd or Woolner Rd lights.

In The Narrows there is a restored 700 m section of the original track (with a re-sleepered old bridge) between Snell St and Winnellie Post Office. This section was heritage listed in 2011 with assistance from Darwin City Council and the Friends of the North Australia Railway (FNAR). A path runs from Snell St to a bus shelter about halfway along the track; from here you can walk along the verge to view Bridge #4 and an information board. Cross Stuart Hwy at the post office lights to rejoin the rail corridor and bike path.

The Narrows to Pinelands (10 km)

The rail trail and bike path follows the original rail corridor from The Narrows to Pinelands immediately adjacent to Stuart Hwy, past shops, service stations and the Aviation Heritage Centre, and crosses several arterial roads and cycle paths leading to Darwin’s northern suburbs. About 400 m before McMillans Rd are the remains of a loading facility on a siding, used to unload cattle for Angliss Meatworks from the 1960s to 1976.

This section deviates from Stuart Hwy following the original railway corridor, and is surrounded by remnant bushland. There are several path connections to shops and accommodation in Pinelands, Yarrawonga and Palmerston.

Coolalinga is a rural service centre with a small shopping centre and a few cafes on both sides of Stuart Hwy.

The former NAR corridor is largely retained from Coolalinga to Adelaide River.

This section starts at the end of the formal Darwin cycle path and uses a gravel track along a power line easement parallel to Stuart Hwy. After 5 km, turn left at Sayer Rd; 1 km along Sayer Rd, just past the Pheasant Dr intersection, is bike and pedestrian access to the wetlands of McMinns Lagoon Conservation Reserve. To continue on the rail trail from Sayer Rd, follow the informal track on Stuart Hwy verge to reach Arnhem Hwy.

Just before this highway is historic Wishart siding fettler’s cottage, privately owned but clearly visible from the track. The building shows what life was like for railway workers before electricity and air-conditioning. It was heritage listed in 1992 and has recently been restored by the owner. In the early 1990s the cottage was open to the public as a tea room, and Commonwealth Railways Diesel Locomotive NSU63 was situated on the front verge before it was moved to Adelaide River in the late 1990s, where it is now fully restored and on display.

The trail along here is overgrown and several bridges have original 1880s girders across them, including the Elizabeth River bridge, one of the largest along the former railway. Riders need to continue on Stuart Hwy to continue to the next section of rail trail. The road shoulder varies in width and cyclists who would rather not mix with highway traffic can take back roads through Humpty Doo to Goode Rd; however, the highway verge is wide and can be ridden on with a good mountain bike and with care.

If you are driving to ride this section only, park at Noonamah Tourist Park where a sign next to the bus stop provides details of the history of this area, including the railway.

Riders who wish to continue on the rail trail will need to take several public roads, and Cox Peninsula Rd is the busiest of these. Head west for 3 km, crossing the new railway line, then turn left on Mala Plains Rd, then left on to Mulgara Rd. Continue to the end, where the rail trail continues on your right.

This section of the trail mainly traverses Crown land between farms and mango orchards, making use of a buried water main easement. There are several gates and some fences to negotiate.

The former rail corridor is impassable from here, for access to the Darwin River to Batchelor trail section, use public roads (around 16 km). From the intersection of Old Bynoe Rd and Hopewell/Duddell Rd, head west along Old Bynoe Rd. Services near here include Tumbling Waters Holiday Park (cabins, camping and restaurant) and Darwin River Tavern (camping, pub meals and store). At Darwin River Rd head south, then turn right at Meade Rd, left at Mira Rd and Spencer Rd is a few km further on the left. Head east on Spencer Rd to find the start of the rail trail to Batchelor.

Batchelor, the ‘gateway to Litchfield National Park,’ has a museum and a historic walk around the town, a service station, general store, medical clinic, butterfly farm, tourist flights and skydiving, and a national park ranger office. Tours to Litchfield National Park pass through the town often, and it is possible to detour to the park by following Litchfield Park Rd; best done on weekdays to avoid weekend traffic.

This section crosses remote areas with limited services and in some spots no mobile reception. Carry water, bike spares, a first aid kit, food and have studied or downloaded maps.

Adelaide River is a popular stop along Stuart Hwy and has bus services to and from Darwin (115 km to Darwin via the highway). There is a post office, general store, service stations, and a hotel and accommodation. Just 3.5 km east of the town is Mount Bundey Station, which also has accommodation, camping and meals.

On the south side of the river is the heritage listed Adelaide River Railway Heritage Precinct. The Adelaide River railway bridge was one of the first large bridges to be built on the Palmerston to Pine Creek line in 1887-88. The bridge was first crossed in December 1888 by the Silverton locomotive. 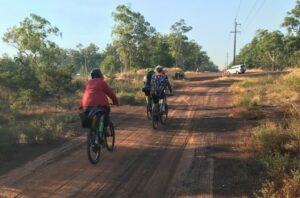 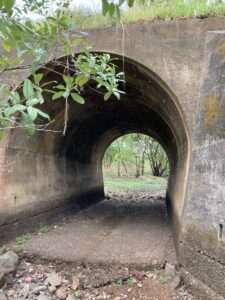 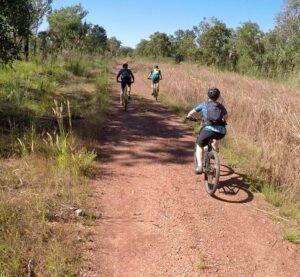 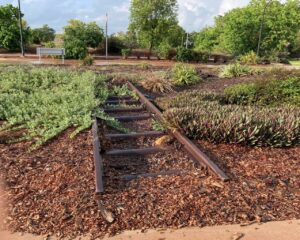 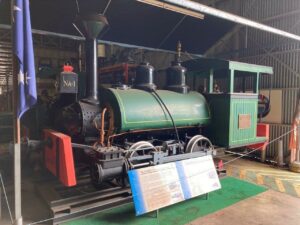 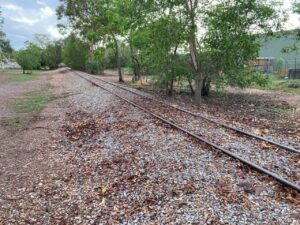 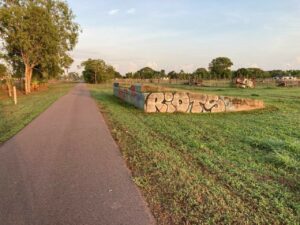 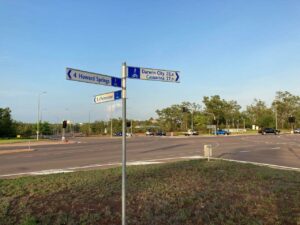 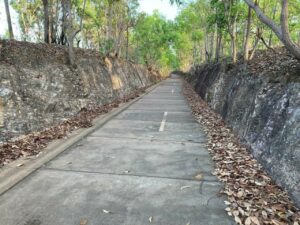 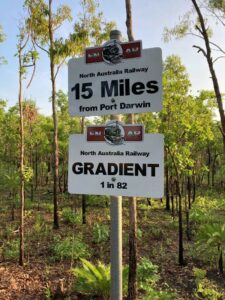 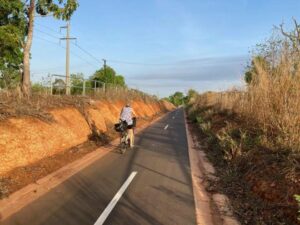 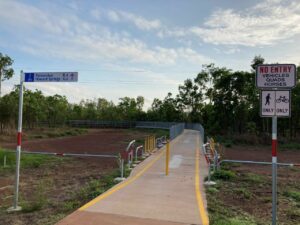 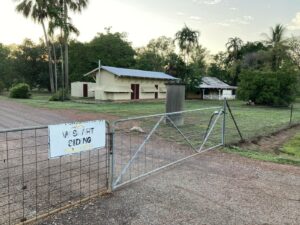 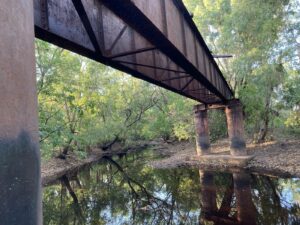 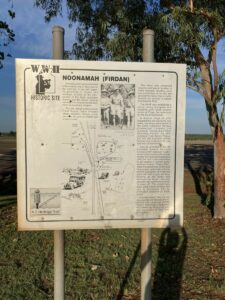 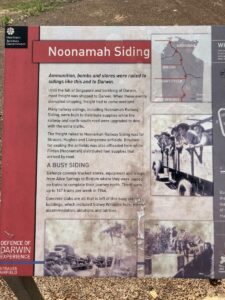 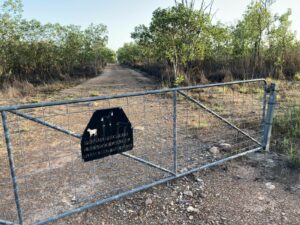 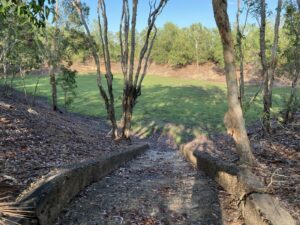 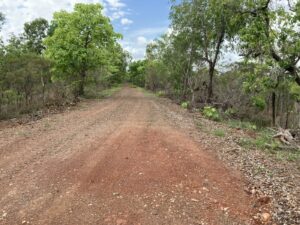 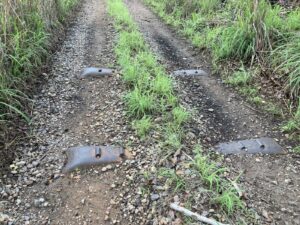 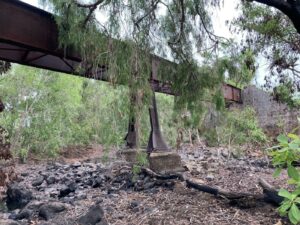 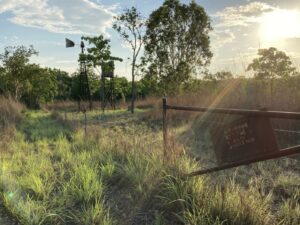 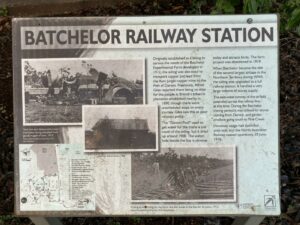 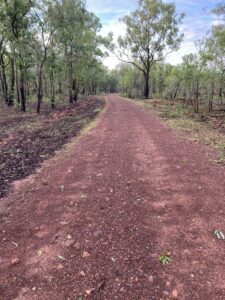 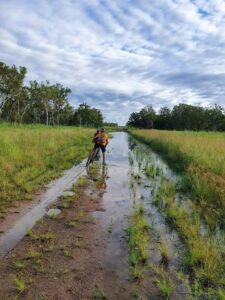 Some parts are completely inundated during the Wet season and dry out around May. (2020-10) 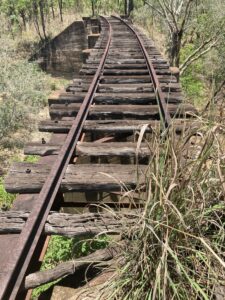 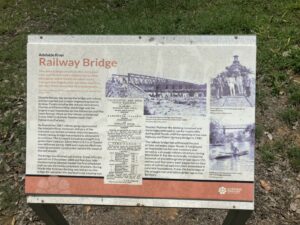 One review of “Darwin to Adelaide River Rail Trail”

Rode this short trail 6 Oct 2014. I found the surface very smooth, clean and in good repair. Wide enough for other riders, runners and walkers to pass safely. The trip from Darwin City to Howard Springs took me 1.5 HRS. The waiting for traffic at the major intersections took a few minutes. There are a few signs to indicate the History of the Rail but more information is required at major or interesting locations. You have to leave the trail, but only a short distance to get drinks or food and these places can be easily seen from the trail. Overall, a great experience for a sixty plus gent from Victoria. Good cycling. Gary H.

The section of formal cycle path from Darwin CBD to Coolalinga is managed by the Transport section of the NT Department of Infrastructure, Planning and Logistics.

Please report any issues to Transport Cycling or phone 8999 5511.

Land along the remaining parts of the rail trail is owned by the Department of Infrastructure, Planning and Logistics as either vacant Crown Land or road reserves.

To contact us about this rail trail, email admin@railtrails.org.au

We acknowledge the Larrakia and Kungarakan people, the traditional custodians of the land and waterways on which the rail trail is built.

Future work on the unmaintained sections of the rail trail is awaiting funding. Two sections are identified in the NT Government’s 10 Year Infrastructure Plan as potential projects for future investment.

The narrow-gauge line between Palmerston (the former name of Darwin) and Adelaide River opened for passenger service in July 1888, and the full line from Palmerston to Pine Creek opened in September 1889, mainly to serve mines in the area. It was extended to Katherine (Emungalan) in 1917 to serve the cattle industry and finally to Larrimah and Birdum in 1929.

This was as far south as the line went, with road transport to Alice Springs from where the Central Australia Railway went to Adelaide. Nevertheless, it played a vital role in the development of the Northern Territory during WW II. Following the war, improving roads, isolation, and damage to iron ore loading facilities at Darwin Port from Cyclone Tracy in 1975 resulted in the last railway service in 1976.

The new standard gauge Alice Springs to Darwin railway opened in 2004 and used only the former rail corridor between Katherine and Adelaide River, bypassing the entire section from Darwin to Adelaide River and Katherine to Birdum. The original Darwin Railway Station was next to rail yards that remain as vacant land along Frances Bay Drive, adjacent to a bike path. The new Darwin rail terminal is in the industrial area of East Arm. Many parts of the former railway have been declared heritage places

Family Cycle and Walk Day Come and celebrate the opening of the new $2 million Palmerston ...

To bring some media focus to the issue of extending Northern Territory rail trails, the ...