4 based on 5 reviews
Mark as favourite Mark as visited

The Atherton Tableland rail trail currently comprises three sections – 20km from Atherton to Walkamin, an ‘informal’ 7.5km section from Walkamin to Mareeba Airport, and a recently constructed 7km section from the Airport to Mareeba Heritage Museum.

Atherton and Mareeba have all facilities while Tolga (6 km north) has toilets, cafe and pub, while the small settlement of Walkamin (14.5 km north of Tolga) has toilets, car parking and a small store

The trail begins at Platypus Park on the southern side of Atherton and runs through the centre of the township. There are many trails leading to the Atherton Forest Mountain Bike Park (refer to map here), and the Atherton Skills Park and MTB trailhead lie on the trail.

The trail runs north to Tolga, passing the Tolga Scrub, a remnant of endangered mabi forest that once covered most of the Atherton Tablelands.

A diversion off the trail leads to the popular 28km Tolga to Kairi cycling loop.

From Tolga the trail heads gently downhill to Rocky Creek, which, during World War II, housed the largest military hospital complex in the Southern Hemisphere with some 60,000 Australian soldiers treated here for war-related conditions.

The trail passes the restored Rocky Creek igloo, one of the complex’s remaining buildings. Across the road is the Rocky Creek campground and war memorial park, the focus of Victory in the Pacific celebrations each year. There are rest and toilet facilities at Rocky Creek.

From Walkamin heading north, the 7.5km trail to the Mareeba Airport adopts a gentle downhill grade but is rough and informally ridden. It passes through some attractive Eucalypt country as well as agricultural properties. Mareeba Shire Council have indicated that this section could be upgraded for use during 2023 which is great news!

Mareeba Shire Council have recently completed this section. It is a linear trail which offers an excellent surface and Eucalypt groves provide good morning and afternoon shade for most of the trail. The  Mareeba Heritage Museum is a wonderful end to your ride and offers Tours and Activities, Visitor Information and Events Calendar.

Once the link between Mareeba Airport and Walkamin is completed, the Atherton to Mareeba Rail Trail will be 36km – the fourth longest trail in Qld. 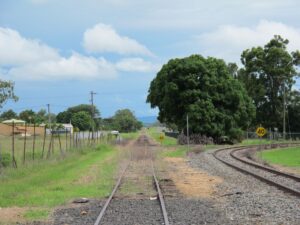 Mareeba with former Atherton line to left and inland railway to right. [2011] 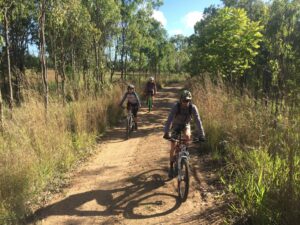 Riding the undeveloped section between Mareeba and Walkamin [2017] 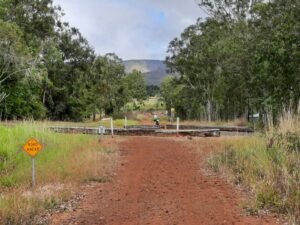 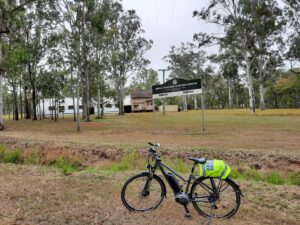 An 'Igloo building at the former Rocky Creek military hospital facility, which was reportedly the largest in Australia during World War 2. [2021] 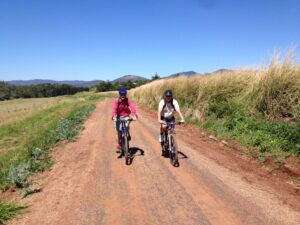 Cruising between Tolga and Atherton [2014] 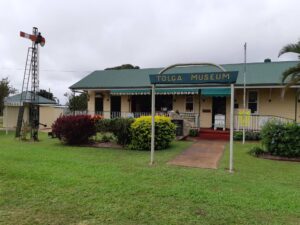 The former station at Tolga is now a museum [2021] 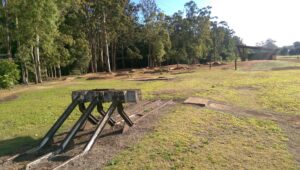 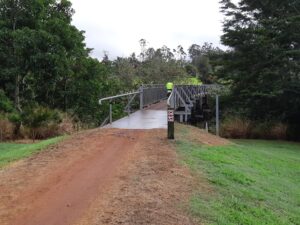 The Mazlin Creek bridge near Atherton [2021] 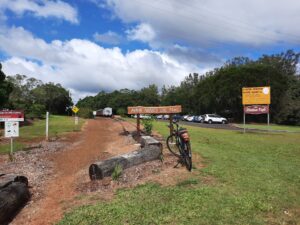 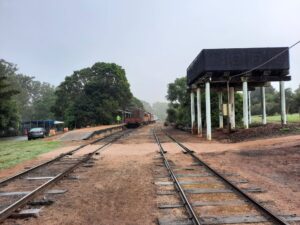 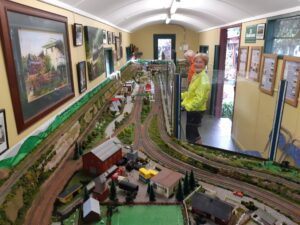 Some trains are still running at Atherton, albeit models at the Platypus Park cafe! [2021] 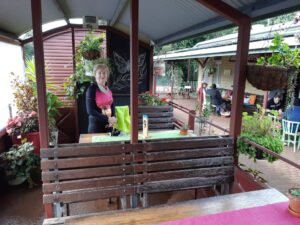 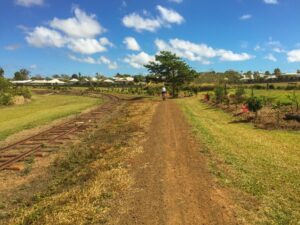 The railside trail on the way out of Atherton [2020] 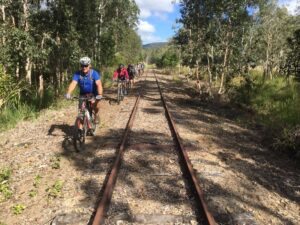 Thee railside trail heading out of Atherton towards Herberton [2020] 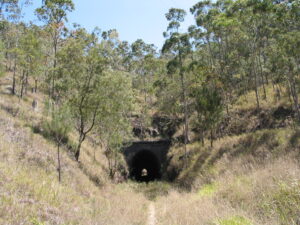 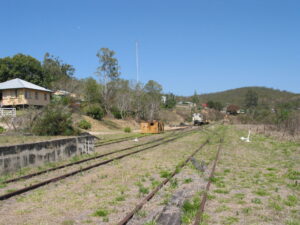 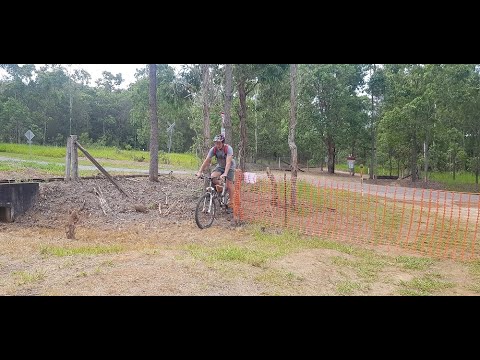 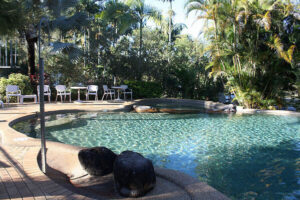 Located just 10 mins drive away from the start of the Atherton Tablelands Trail, NRMA Atherton Tablelands Holiday Park is a eco certified accommodation provider, set amongst the lush rainforest. With a bike wash station and heated pool it’s the perfect base to rest and recover after a big ride.

A beautiful ride through tropical countryside!
The start of the trail proper at the bridge over the river didn’t seem to be signposted.
There’s a drop in elevation of about 200m over the length of the trail from Atherton. The surface is good, but coarse in some areas, requiring good quality tyres. There’s plenty places to get refreshments or have a picnic, including at Rocky Creek campground.
A very worthwhile ride!

My wife and I rode this trail in July 2021. The first bit out of Atherton is hard to find, and you have to cross a busy road near a bridge. This is a really nice trail once you get on it and it currently ends at Walkamin. We would have liked to keep riding on to Mareeba, but it was too rough and overgrown.
There are lots of interesting and historical sights along the way such as Tolga and Rocky Creek. The station precinct at Atherton is really great, with coffee and cake in one of the old railway carriages on site. I believe there are plans to extend the trail to Mareeba, as well as further south towards Herberton. This will be fantastic.

Part of this Trail is Run by Park Run each Saturday, it is a good run if you are ion the Atherton Tablelands area at any time .

The Atherton Tablelands Rail Trail starts at the Mountain Bike Trails in Atherton and heads north through Tolga. Keep peddling north to the Historic site of the World War 2 Hospital which saw 60 thousand people treated for sickness and injury here during the years 1943-45 when Australia defended its Northern shores from Japanese invasion. All that remains of the massive site is the dilapidated Rocky Creek Igloo which is being restored by the Rotary Club of Atherton. Check it out on the Rocky Creek Igloo WW2 Restoration Facebook page.

Have just walked from Atherton to Tolga and back. This trail is the best idea in the region. Finally something for all ages to enjoy! However, next time I may reconsider my choice of footwear as thongs led to a rather painful walk home haha! The dogs loved it too so we will all sleep well tonight. It would be great to put a botanical garden along the track since the proposal to do so along Priors Creek was rejected…if anyone would like to try and do so let me know because I am keen!

For information about links to services and businesses along this trail go to:

The trail is managed by Tablelands Regional Council

To report any issues or problems contact Tableland Regional Council on 1300 362 242 or email: info@trc.qld.gov.au

We acknowledge the Tableland Yidinji people, the traditional custodians of the land and waterways on which the rail trail is built.

A feasibility study detailing the extension of the remaining 16 km section between Walkamin and Mareeba was released in early 2020. RTA representatives continue to work with Mareeba Shire Council on the project, which could link the two major townships of the Tablelands by way of a safe 36.5 km trail.

Extending the trail to the south from Atherton towards Herberton is also a priority. Atherton Herberton Historic Rail (AHHR) holds the lease for the railway corridor between Atherton and Herberton, and the development of a 21 km shared use trail is well advanced.

The current railway line is being restored so AHHR can operate tourist trains between Herberton and Atherton, and a section of the corridor between Atherton to Hasties Road has been developed for use by cyclists, equestrians and walkers.

The Atherton to Herberton railway line has significant historic and cultural values; the tunnel at the top of the Herberton Range is reputed to be the highest in Qld.

The trail also crosses a diverse landscape with outstanding natural features such as Carrington Falls and Hasties Swamp National Park, a large seasonal wetland that is a refuge and birdwatching hotspot for resident and migratory birds.

From Herberton the original trail runs for 35 km to Ravenshoe, but this section is partly demolished and effectively unrideable. The last 7 km section from Tumoulin to Ravenshoe is intact and the Ravenshoe Railway Company still holds the lease, though the train is not currently running.

There is limited political interest in redeveloping the redundant sectors of the Tablelands region, but there is potential for a trail of around 92 km from Mareeba to Ravenshoe.

The Atherton Tableland Rail Trail constitutes a small part of the extensive history of the Cairns to Ravenshoe railway system. For comprehensive information on this system, go to:

We thank Tablelands Regional Council, Rail Trails Australia and Atherton-Herberton Historic Railway Inc. for their continued support, and look forward to working with AHHR on the shared trail from Atherton to Herberton. This link will also open up safe cycling opportunities in the savannah country to the west of the Tablelands, including the Lappa Trail and the Irvinebank to Boonmoo tramline.

On 2 December 2022 the Queens Jubilee and commemorative tree planting event was held adjacent to the ...

SAO's riders supporting MSC on taking the initiative to ...

Come and celebrate the opening of the extention of the Atherton Rail Trail Saturday 23 March 2019.

Tablelands Outdoor Recreation Association Inc. are pleased to advise that the official opening of the ...

Come and join us for a celebration of cycling! and enjoy riding the Rail Trail ...

Friends of the Atherton Rail Trail and the Tableland Regional Council invite you to the ...

Stage one of the Atherton to Mareeba Rail Trail is now 85% complete,with stage one ...

After 7 years of hard work by the Friends of Atherton Tablelands Rail Trail and the ...

A feasibility study for the proposed Atherton Tablelands Rail Trail from Atherton to Yungaburra has ... 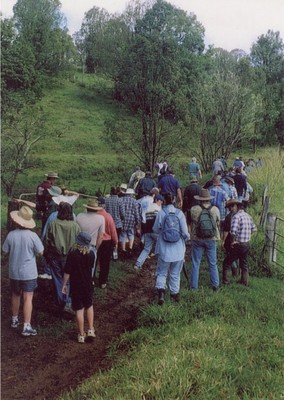 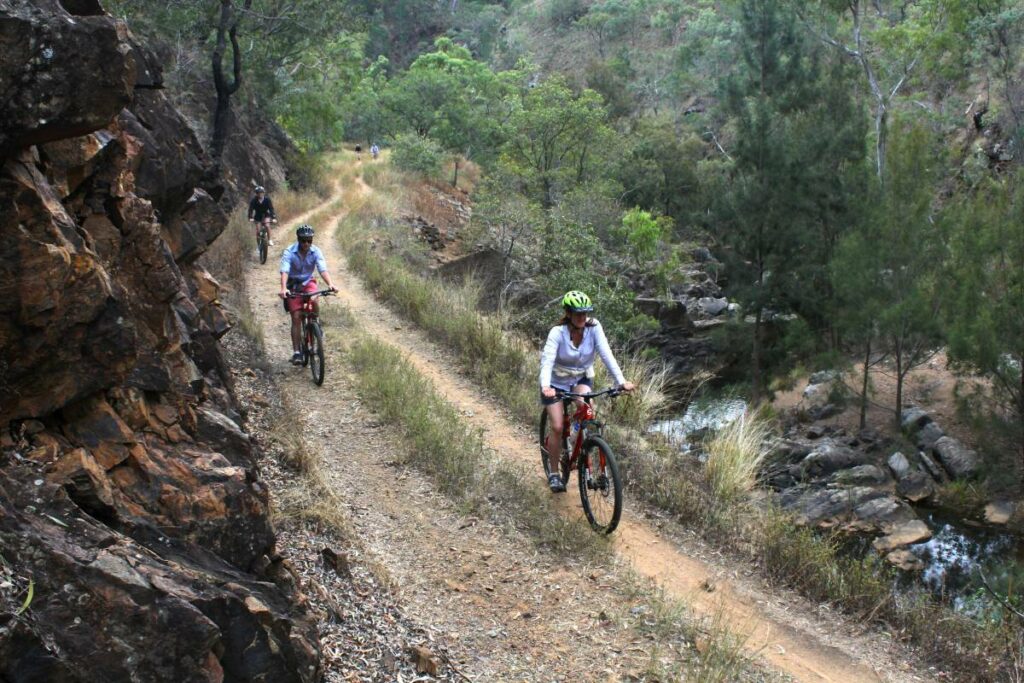 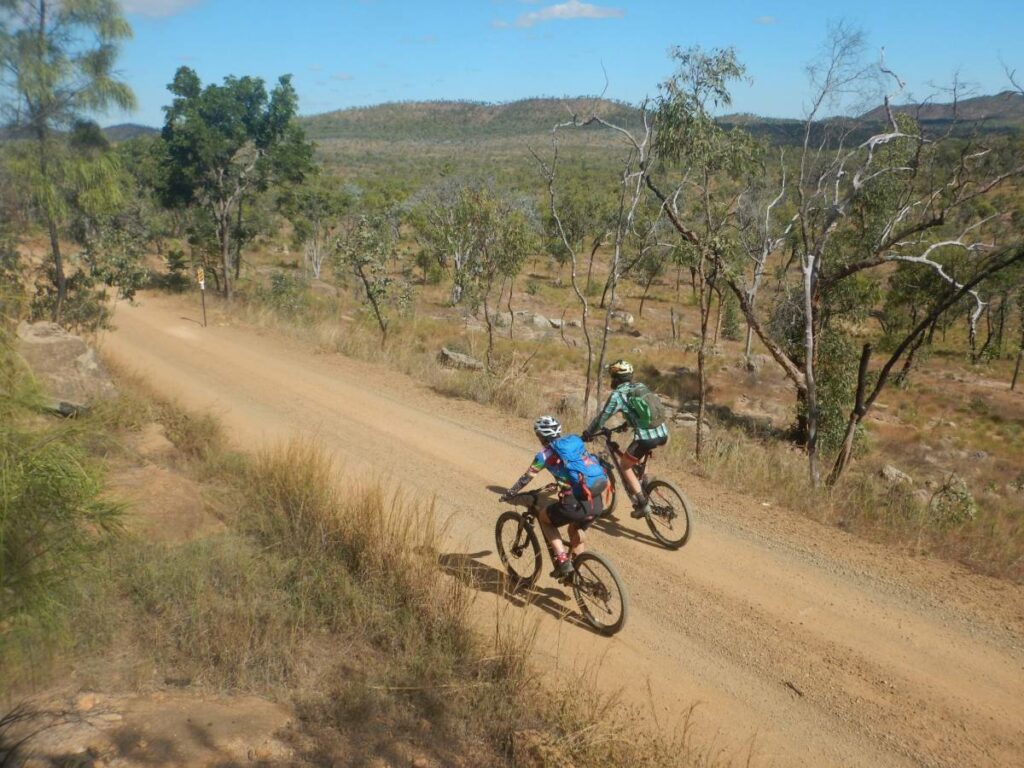