2.5 based on 4 reviews
Mark as favourite Mark as visited

This old private railway corridor has great possibilities as a rail trail. The trail would start at Hexham and traverse a large wetlands area before approaching the village of Minmi. The line then branches off westward toward Richmond Vale Colliery and Kurri Kurri.

A short distance past the Pacific Highway underpass is the first tunnel, in the Seahampton area. There are deep cuttings and more tunnels before the junction to Kurri Kurri. Richmond Main Colliery is now closed, but the Richmond Vale Steam Society has a wonderful collection of engines, carriages and other railway memorabilia on display on the third Sunday of each month. 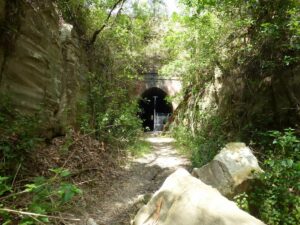 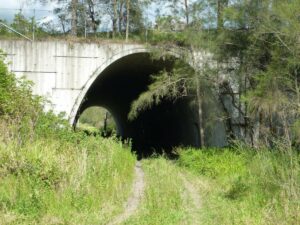 Underpass below the Pacific Highway near Minmi (2013) 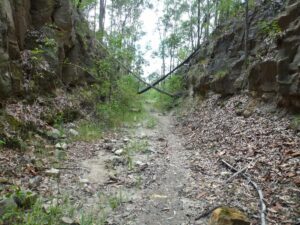 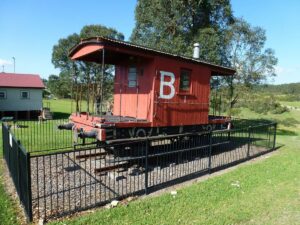 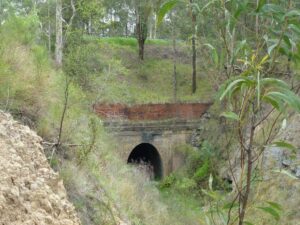 The entrance to the third tunnel towards Richmond Vale (2013) 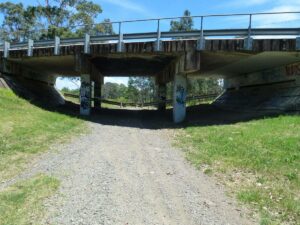 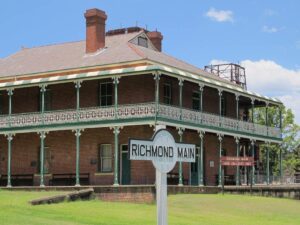 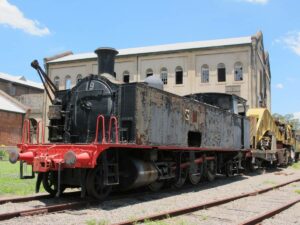 Some railway equipment at Richmond Vale 2013) 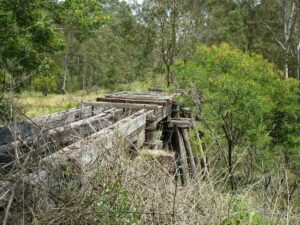 Unfortunately, proponents have been pushing for a $14 million budget to build this– basically to replace the old bush rail line used by MTBs with an over-built concrete cyclebahn.

A big problem is the trail is/will be covered in snakes from the adjoining wetlands. (I saw 6 the last time I MTB’d from Hexham to Minmi.) The weekend Family Cyclists however will be more bothered by the speeding Strava weenies that’ve found a new base after harassing the users of the Fernleigh.

The private ownership issues have been resolved

Richmond Vale Rail Trail Inc (RVRT) has been established to help promote the trail. A $50k feasibility study was completed in 2015 and shows the trail as sustainable, The City of Newcastle (Council) is the lead for this development in conjunction with the two other councils. The Richmond Vale Rail Trail will rum from Newcastle to Kurri Kurri. The trail will have a trail-head at Shortland Wetlands Centre off Sandgate Rd Shortland. The description given lists it as a basket case – IT NEVER WAS!!
The current intention of the three councils is to run it on the same basis as the Fernleigh Track.
Temders have been called for an EIS etc to progress the trail.
The initial trail traverses the Hexham Swamp using a disused water pipeline to get to the RVRT line at Hexham.
For greater detail contact RVRT Inc by email on rvrt.inc@gmail.com. Thanks David Atkinson NCM RVRT sub committee and Vice Chair RVRT Inc.

This would put Newcastle/Hunter Valley on the map as the cycling capital of NSW.

Richmond Vale Rail Trail Inc. website has information about the history of the railway line, the environment and proposed trail.

We acknowledge the Awabakal and Darkinjung people, the traditional custodians of the land and waterways on which the rail trail will be built.

Since the line closed in 1987, the Newcastle Cycleways Movement has worked closely with Newcastle and other councils to make this trail a reality. A separate supporters group has also been formed, and is working with tourism authorities, local businesses and institutions to formulate destination strategies and management plans.

The aim is to eventually link Newcastle (including the CBD and University) with the towns of Kurri Kurri and Cessnock, and ultimately the vineyards of Pokolbin in the Hunter Valley – a distance of more than 60 km. The combination of terrains and environments, the area’s history, the challenging distance and the major destinations at each end would provide a substantial basis for a community asset, providing transport, tourism, recreation, environmental and heritage values.

Recent developments provide greater confidence that the rail trail may yet be built. A large portion of the land owned by Coal and Allied Operations Ltd, including most of the length of railway easement, has been transferred to NSW Government ownership and designated as conservation lands administered by the NSW National Parks and Wildlife Service (NPWS).

NPWS now supports the establishment of the Richmond Vale Rail Trail. Newcastle, Lake Macquarie and Cessnock councils all support the development in principle, as do many other stakeholders such as the University of Newcastle’s Tom Farrell Institute for the Environment, State and local tourism bodies and many Hunter Valley vintners.

The City of Newcastle, with contributions from these supporters and from the Donaldson Coal Conservation Trust, commissioned a design and environmental study to examine the requirements for construction and approvals. A development application for the Newcastle section has been exhibited, and will likely be approved in 2021. Cessnock and Lake Macquarie councils are jointly working on their own development application, and expect to exhibit this year as well. With approved applications in hand, these councils will seek funding from State and federal governments.

This project is building serious momentum. The success of rail trail developments elsewhere in Australia, the Central Otago Rail Trail in New Zealand, and many trails overseas are inspiring examples of what can be achieved by concerted effort to preserve these historic lines by restoring them to a modern purpose. This line will never haul coal, people or other commodities again; nevertheless, the prospect of tourists being able to ride almost all the way from Newcastle to the vineyards on a safe, scenic and historic track may be closer than you think!

The company formed by James and Alexander Brown, immigrants from Scotland who arrived as young men to New South Wales in 1842, became what was undoubtedly the premier coal mining venture in the first hundred years of the colony.

In 1857, John Eales completed a railway line from his mine in Minmi to the banks of the Hunter River at Hexham, where the coal was loaded on to ocean-going vessels. The 6.4 km crossing of the Hexham Swamp by this 10 km line was considered a major feat of engineering in its day.

The discovery of a large coal seam at Richmond Vale Colliery (later renamed Richmond Main) to the west of Minmi across the Sugarloaf Range, resulted in a 19 km extension to the Hexham to Minmi line being built; this became known as the Richmond Vale Railway.

The new line was completed in 1905. It branched from the old line a few km north of Minmi (Minmi Junction), crossed Blue Gum Creek and traversed three tunnels on its way through the Sugarloaf Range to Richmond Vale. It was eventually extended to Pelaw Main near Kurri Kurri, and branch lines were built to carry coal from other mines in the region.

Richmond Vale Railway operated continuously for 83 years, and when it closed in 1987 was the last commercial steam-operated freight line in Australia. The closure of the Richmond Vale line signalled the end of an era in Australian railways.

As with most of the railways abandoned over the past 100 years, the Richmond Vale line has become derelict, its timber trestles falling into disrepair or collapsed. The three original tunnels, however, are in remarkably good shape and are a testament to the men who built them.

On 6 December 2021, the Hunter and Central Coast Regional Planning Panel (RPP) granted approval for the ...

The proposed Richmond Vale Rail Trail (RVRT) near Newcastle NSW would be a wonderful rail ...

Lake Macquarie and Newcastle City Councils are showing what can be done when it comes ...

NSW is getting closer to having another rail trail

The NSW Government Department of Planning, Industry and Environment has announced a $75,000 funding boost towards ...

The much-vaunted $14 million Richmond Vale Rail Trail is a step closer to reality, with Newcastle ...

Richmond Vale Rail Trail moves to the next step of Development

A local committee has been working on the proposed Richmond Vale Rail Trail (RVRT) between ... 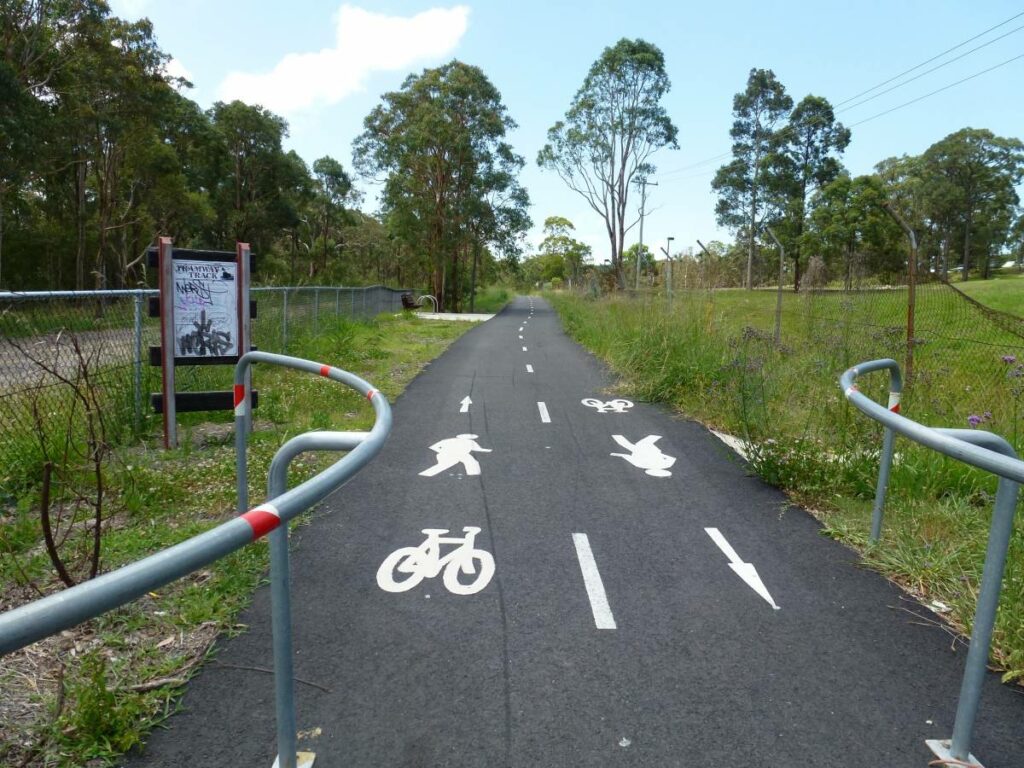 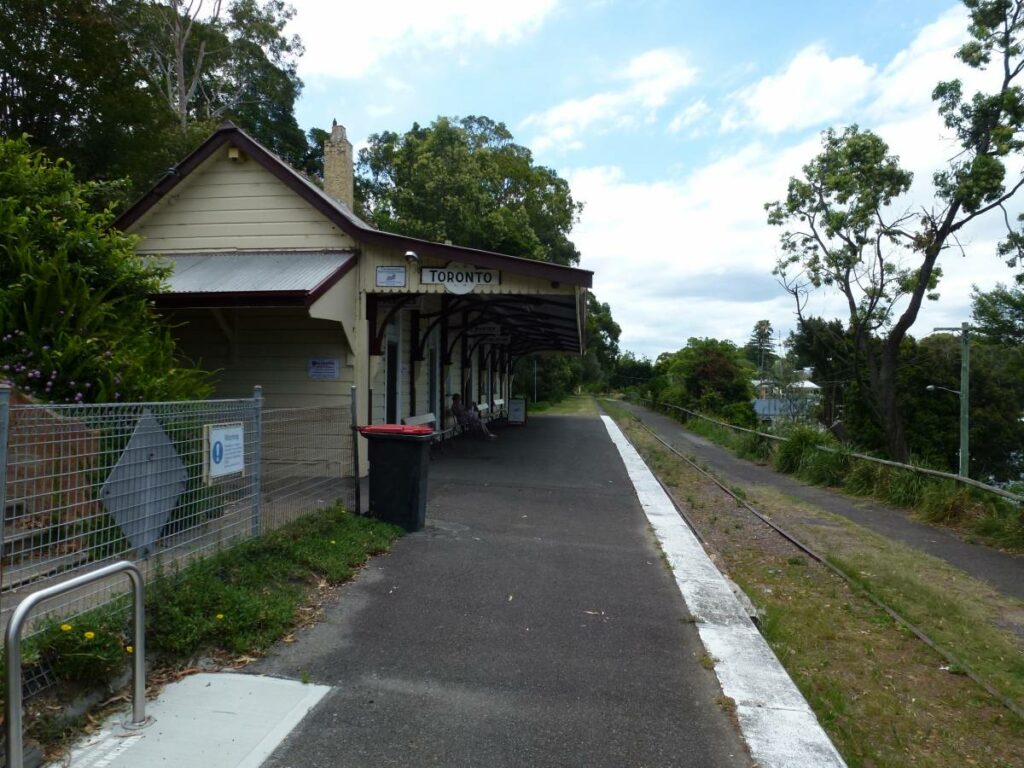 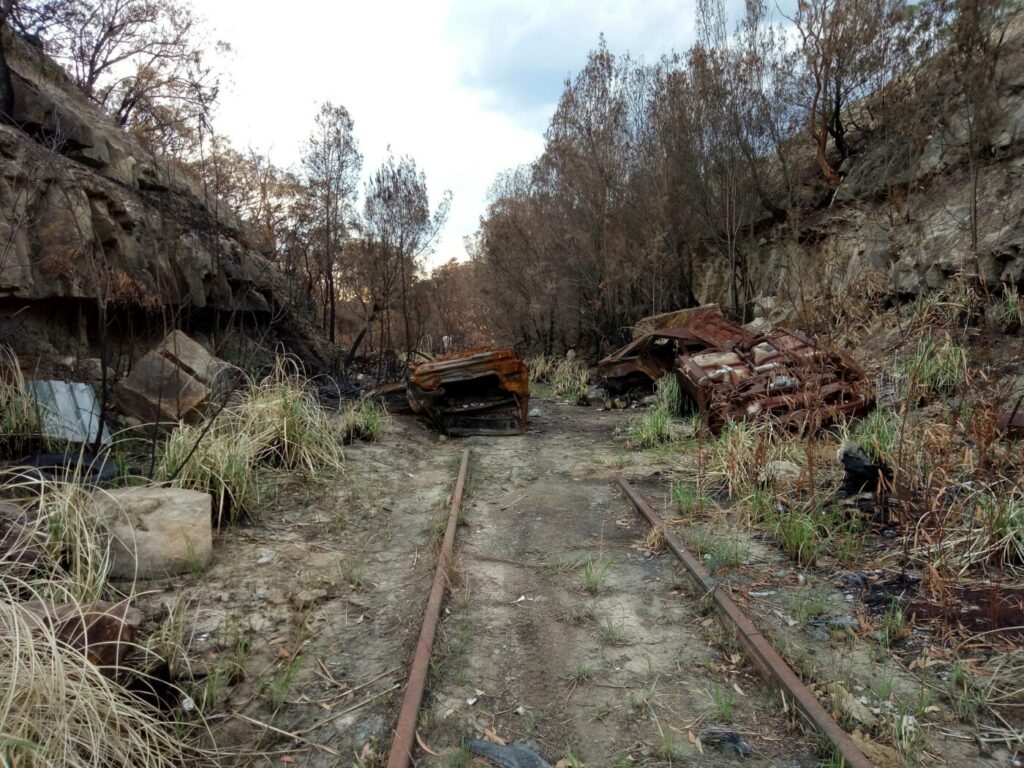 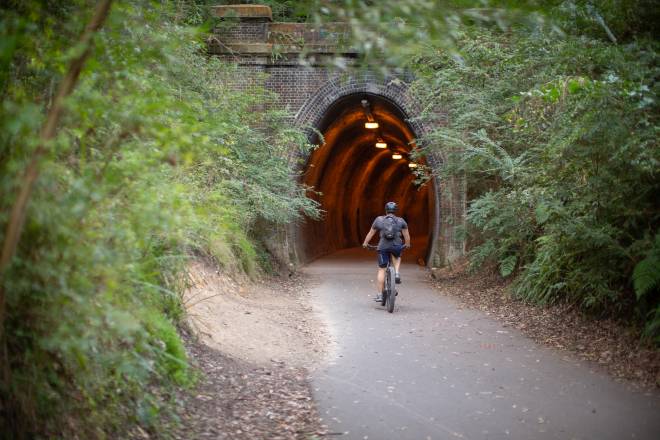 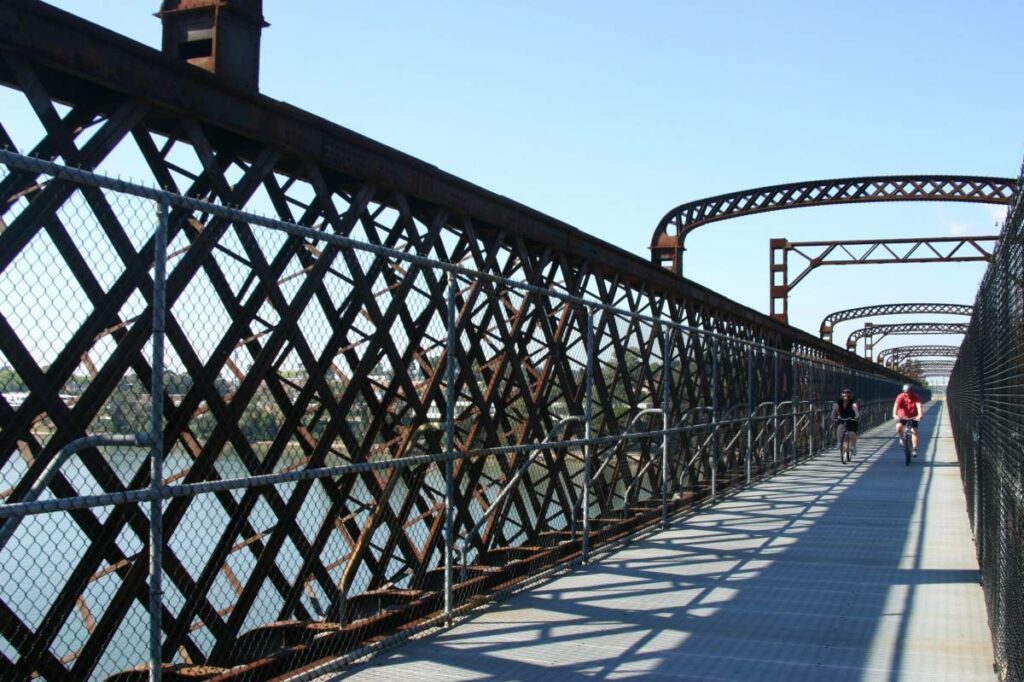 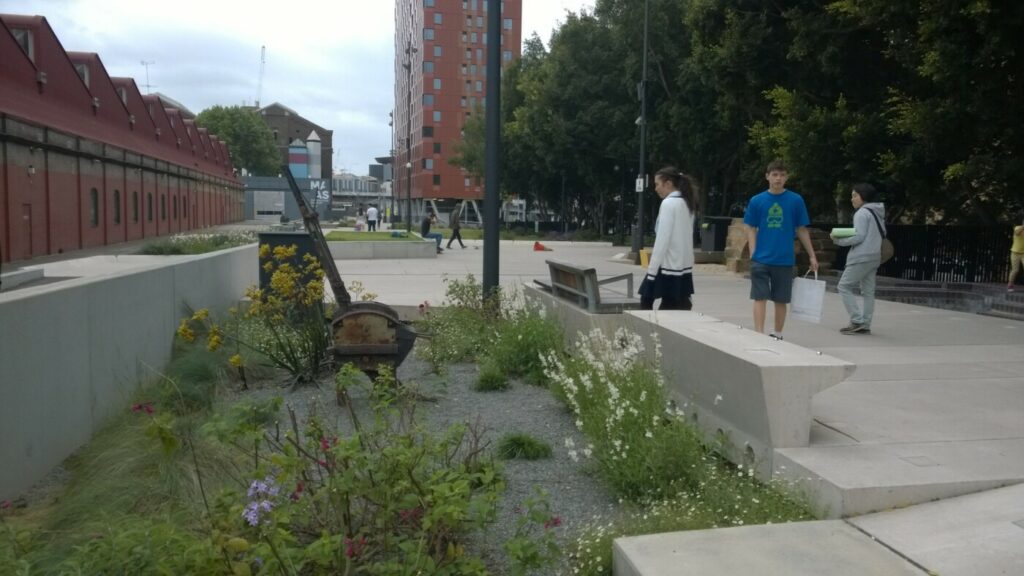 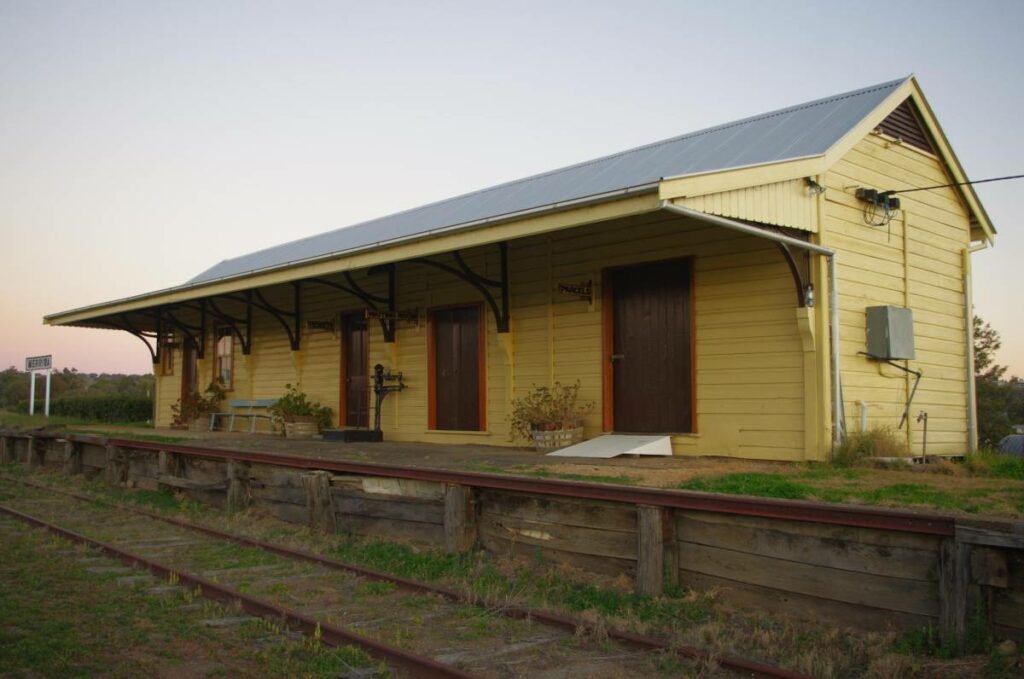 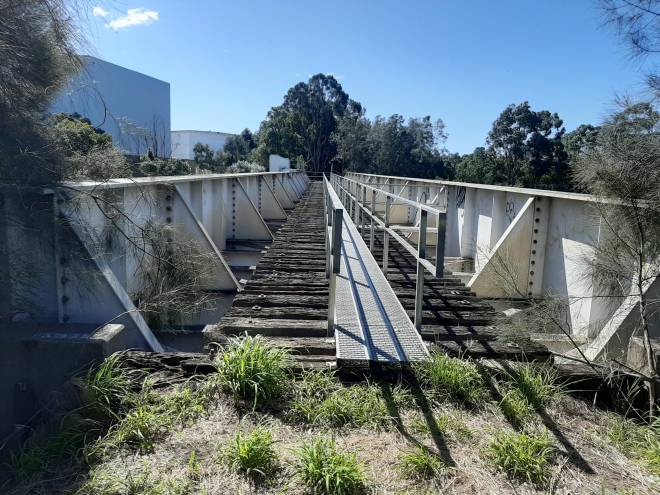