This short rail trail runs through a 90m long rail tunnel near the small town of Canungra.

The tunnel can be accessed from a signed parking area off Beaudesert Nerang Road. From there a path leads down to the tunnel and a small picnic area. A trail can be followed for 500m north of the tunnel to the end of Duncan Street, which leads into Canungra.

A roughly formed trail follows the tramway formation south of the tunnel for an unknown distance. We followed it for about 200m to a creek where a bridge would once have been. If you have further information please let us know. 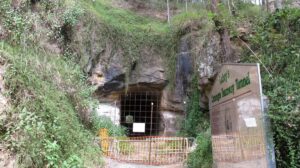 Entrance to tunnel has been blocked off (2011) 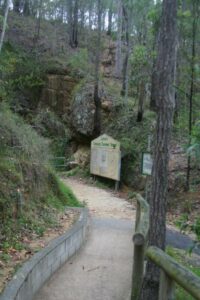 The approach to the tunnel entrance (2007) 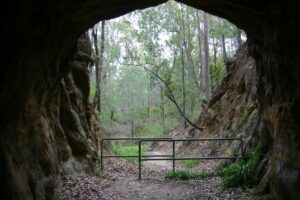 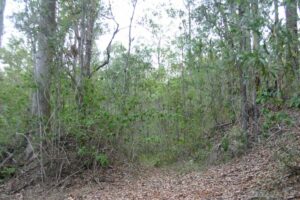 Part of the former tramway formation (2007)

The trail is managed by the Scenic Rim Regional Council

Please report all issues with the trail to the council.

The tunnel was constructed in 1900 by the Lahey brothers as part of a tramway to transport timber from the valleys to the south to their mill in Canungra. The Darlington Range through which the tunnel passes was a considerable obstacle for the line. Even with the tunnel, the line still climbed on an incredibly steep 1 in 12.5 grade out of Canungra. To tackle these grades, Laheys used Climax and Shay geared locomotives. South of Canungra today you will find Shay Drive and Climax Place. The descent into Canungra with a load of logs must have been nerve racking from the loco crew, and as a precaution, a runaway siding was constructed part way down.

Initially timber from Canungra was transported by road, but after much lobbying, a government railway opened to the town in 1915.

By the 1920 most the timber had been exhausted. Occasional trains continued to run until around 1930 and the line closed in 1935.